Spain public debt ratio to near 100% of GDP next year

Spain's public debt will soar to nearly 100 percent of output at the end of 2014, the government said Monday, despite massive spending cuts that have triggered angry street protests. 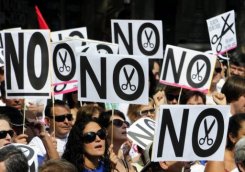 People take part in a demonstration protesting against budget cuts in Madrid on July 21, 2013

The debt ratio has soared from 40.2 percent of GDP in 2008, when the end of a decade-long property boom triggered an economic slump that caused unemployment to jump and tax revenues to plunge.

Prime Minister Mariano Rajoy's conservative government had forecast in its 2013 budget that the debt-to-GDP ratio would stand at 90.5 percent at the end of this year.

Spain has pushed through painful spending cuts to bring down its soaring public deficit and get its accounts in order under pressure from the European Union. It resisted pressure last year to seek a full bailout from its neighbours.

The measures have caused the popularity of Rajoy's Popular Party to slump and they have sparked regular street protests and strikes by teachers, doctors and other public workers.

The draft budget for 2014 which was approved Friday at a cabinet meeting includes further unpopular austerity measures for pensioners and public workers even as it slightly improved the outlook for jobs and economic growth.

The budget will freeze public workers salaries for a fourth consecutive year.

Pensions will rise by just 0.25 percent in 2014, the minimum allowed under a pension reform approved by the cabinet on Friday that will stop indexing payouts to inflation.

Unions argue the pension reform will mean an effective loss of spending power for retired workers.

The government says tough cuts are vital to drag Spain out of recession and fix its public finances.

Budget Minister Cristobal Montoro reiterated that Spain, the eurozone's fourth-largest economy, would likely return to growth during the second half of this year.

"The budget for 2014 is an economic recovery budget. This budget will help us return to growth and create jobs in our country," he said as he presented the details of the budget in parliament.

The 2014 budget is based on a forecast that the Spanish economy will grow by 0.7 percent next year while the unemployment rate will dip under 26 percent.

For 2013, the government forecasts the economy will shrink by 1.3 percent while the jobless rate will end the year at 26.6 percent.

The Spanish Treasury will need to issue 243.9 billion euros ($330 billion) in debt next year to cover maturing debts and new financing needs, up from 207.2 billion euros this year, according to the 2014 budget details presented to parliament.

Covid-19 to be declared endemic in October

The government will declare Covid-19 an endemic disease in October, and the Centre for Covid-19 Situation Administration (CCSA) will then no longer be the main agency dealing with it.

BUCHAREST: It didn’t take long after Russia attacked Ukraine for French Colonel Clement Torrent to get his orders: He had six months to build a base for 1,000 soldiers on NATO’s eastern frontier.