The Chinese and European central banks said Thursday they reached agreement to set up a "currency swap" mechanism for the purchase and repurchase of their respective currencies, the yuan and euro. 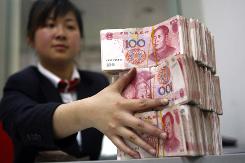 A teller arranges stacks of 100-yuan notes at a bank in Suining, southwest China's Sichuan province on March 20, 2010

The "bilateral currency swap arrangement" will be valid for three years, the European Central Bank said in a statement on its website.

When Chinese yuan are provided to the ECB, the maximum size of the arrangement will be 350 billion yuan (42 billion euro), the statement said.

It will stand at 45 billion euro when the single currency is provided to the People's Bank of China (PBoC), the statement said.

The PBoC released a similar statement on its website announcing the deal, which it said was agreed Wednesday.

"The swap arrangement has been established in the context of rapidly growing bilateral trade and investment between the euro area and China, as well as the need to ensure the stability of financial markets," the ECB statement said.

The deal is also meant "to serve as a backstop liquidity facility and to reassure euro area banks of the continuous provision of Chinese yuan", it added.

China has taken steps in recent years to increase international trading of its currency and has been working eventually to make it fully convertible for international transactions, though key restrictions remain.

It is convertible for trade purposes, for example, but the government keeps a tight grip on the capital account on fears that unpredictable inflows or outflows could harm the economy -- and reduce its control.

The euro mechanism follows a reciprocal, three-year sterling-yuan currency swap announced in June by the PBoC and the Bank of England, with a maximum value of 200 billion yuan and 21.1 billion pounds.

That deal came on the heels of an initiative launched in April by the City of London to make the British capital a centre for yuan business.

'Princess of the Wall of Death': Indonesian daredevil defies gravity and stereotypes