Iran has decided to spare the life of a convicted drug trafficker who survived a hanging, media reports on Wednesday quoted Justice Minister Mostafa Pour-Mohammadi as saying. 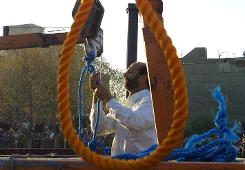 File picture shows an Iranian judiciary staff tying a rope prior to an execution in east Tehran on September 29, 2002

The reports follow calls from within Iran and appeals from international rights groups against the man found alive in a morgue facing execution for a second time.

"The convict who survived (the death penalty) will not be executed again," Pour-Mohammadi said late Tuesday in remarks reported by the official IRNA news agency.

"After putting much effort to prevent the second execution of this convict, we have received a positive response," he said without elaborating.

All judicial affairs and decisions in the Islamic republic rest with the judiciary, which constitutionally operates independently from the government.

The convict, identified only as Alireza M., 37, was pronounced dead earlier this month by the attending doctor after hanging for 12 minutes from a noose suspended from a crane at a jail in northeast Iran.

But the next day, staff at the mortuary in the city of Bojnourd where his shrouded body was taken discovered he was still breathing.

Media later reported that he had fallen into a coma.

Pour-Mohammadi implied that a second execution would be damaging for Iranâ€™s image. "If he survives, it is not expedient to hang him again," said the minister.

The incident led to a heated debate between jurists, with some arguing against a repeat hanging and others for.

According to the media, a petition signed by jurists and attorneys was sent to judiciary chief Ayatollah Sadeq Larijani, appealing for a stay in the exceptional case.

Amnesty International also called for an immediate stay of execution for Alireza M.

Iran has one of the highest rates of execution in the world, with more than 500 cases last year and some 508 executions so far this year, according to Human Rights Watch.

Tehran says the death penalty is essential to maintain law and order, and that it is applied only after exhaustive judicial proceedings.

Murder, rape, armed robbery, drug trafficking and adultery are among the crimes punishable by death in Iran, based on its interpretation of sharia law in force since its 1979 Islamic revolution.

Members of Saudi hit squad that killed Khashoggi were trained in US: report