Angered by years of graft and austerity, Czech voters are poised to hand power to the left-wing opposition in early elections Friday to Saturday, but a stable majority government appears beyond reach. 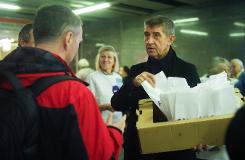 Czech billionaire Andrej Babis (R) hands out donuts during an election campaign of his party ANO ('YES') on October 23, 2013 in Prague, two days ahead of the Czech general elections on October 25 - 26

Voters already made a sharp left turn in January, electing ex-Communist Milos Zeman as president after a decade under the right-wing and eurosceptic Vaclav Klaus.

But whether they then team up with the Communists or a new populist party is an open question.

Coalition governments that lack comfortable majorities are the norm for the Czech Republic, where politics is highly fragmented and smaller parties or independent MPs must be wooed.

The latest opinion survey gave 26 percent of the vote to the opposition Social Democrats (CSSD), 18 percent to the Communists and 16.5 percent to the newcomer populist party ANO led by billionaire Andrej Babis.

The Slovak-born farming tycoon -- who sells everything from foodstuffs to fertiliser -- has capitalised on the blow dealt to the right since Petr Necas's centre-right government fell over a spy and bribery scandal.

Social Democrat leader Bohuslav Sobotka says his party could go it alone in a minority government in the 200-seat parliament, relying on the tacit support of the Communists.

But many Czechs are incensed by the prospect of the far-left becoming a powerbroker for the first time since the Velvet Revolution brought down totalitarianism over two decades ago.

Prague artist David Cerny gave Zeman the finger -- a huge purple one floating along the river before the presidential castle -- in protest against his soft spot for the Communists.

But others, hurting from years of right-wing austerity and a record 18-month recession that ended in the second quarter, welcome a swing to the left.

Like the Social Democrats, the Communists have vowed generous welfare programmes, but they also want the Czech Republic to leave NATO.

Irena Krizova, a Prague lab worker in her fifties, is unfazed and believes no one can turn back the clock.

"The Communists don't have the backing of the Soviet Union, so even if they take power, we can't wind up in the same situation as after the war," she told AFP.

Sobotka has so far ruled out teaming up with Babis.

But analysts say his ANO party -- an acronym for both YES and Action for Alienated Citizens -- is a force to be reckoned with.

"ANO has extremely high coalition potential -- they will go with anyone," says Josef Mlejnek, a political analyst at Charles University in Prague.

"I can imagine them (ANO) in government," Saradin said but warned that any coalition including the fledgling party would be unstable.

Set up in 2011, ANO has taken Czechs by storm, scoring third in opinion surveys after wooing disillusioned voters away from parties across the spectrum with promises of fighting graft.

A legacy of four decades of totalitarian rule, corruption has plagued the EU member of 10.5 million people since its 1993 split with Slovakia.

Corruption watchdog Transparency International ranks the Czech Republic as more corrupt than Rwanda and 94 percent of Czechs believe graft is "widespread in government", according to a poll released by the Gallup Institute last week.

Pensioner Antonin thinks Babis might be a good bet against graft.

"He's the only one I can punish if he fails to work well. I can stop buying his goods. And if people protest like this for three weeks, he will feel it," he told AFP.

SURAT THANI: Authorities have seized 80 illegal fish traps in Bandon Bay in this southern province. Nobody showed up to claim ownership of what officials have classified as destructive fishing gear.

A monkey trainer in Surat Thani says very few monkeys are involved in harvesting coconuts for export and there was no abuse at his centre, disputing claims by animal rights activists.

NAKHON RATCHASIMA: A man accused of killing his wife by slashing her throat has confessed to acting out of rage after she complained about him asking her for money, police say.