Violence broke out as Madagascar voted on Friday in crunch elections to restore democracy after a 2009 coup, leaving a senior government official dead and a polling station torched. 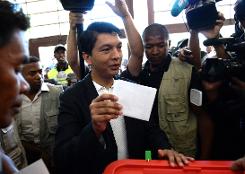 Madagascar presidential candidate Andry Rajoelina gets ready to cast his vote in Antananarivo on October 25, 2013

The violence erupted as voters sought to end a crisis which has crippled the Indian Ocean island since strongman Andry Rajoelina, 39, ousted Marc Ravalomanana four years ago.

"A district chief was killed at a polling station" in the southern town Benenitra, an interior ministry source told AFP on condition of anonymity, without giving details.

Another person was kidnapped from a voting site in Bezaha, elsewhere in the south, while a polling station was burned down in the northern district of Tsaratanana.

Voting was suspended until the three stations were moved but went ahead uninterrupted elsewhere.

Voters were optimistic the election would allow the country to turn the page on its political crisis which has harshly impacted the economy.

The world's fourth-largest island, the island famed for picture-perfect beaches and lemurs, is a magnet for tourists.

"I think Madagascar will emerge from the crisis in this election," said voter Alain Yves as people trickled in, voter ID cards in hand to cast their ballots in the capital Antananarivo.

Around 7.8 million eligible voters were eligible to elect a successor to Rajoelina's interim government.

However some had problems voting because their names were not on the voters' roll or did not have voter ID cards.

Some of the main political players -- including Rajoelina and Ravalomanana -- have been barred from running to prevent their long-standing political wrangling from jeopardising the vote.

With 33 candidates on the ballot and no clear favourite, chances of a first-round outright winner looked slim, raising the possibility of a run-off in eight weeks' time.

Despite the number and variety of candidates -- including ex-ministers, a conservationist and a rock singer -- analysts say only about six are serious contenders.

Rajoelina voted in a suburb of the capital Antananarivo, vowing he was "ready to transfer power according to the rules of the game."

"Our challenge is to end the transition in peace and above all to avoid that the country descends into civil war or confrontation."

He has not named a preferred successor, but former finance minister Hery Rajaonarimampianina is perceived as his favourite.

Rajoelina said he would support a candidate in an eventual second round of voting scheduled for December 20, along with legislative polls.

Since independence from France in 1960, the Indian Ocean island nation of 22.3 million people has lurched from one crisis to another.

The seizure of power by Rajoelina, who was then mayor of Antananarivo, plunged the country into a political, social and economic quagmire.

Donors shunned their former darling, investors stayed away and poverty increased to 92 percent of the population -- the worst level in any country outside war zones, according to the World Bank.

After several failed attempts to return home from South Africa ahead of the elections, exiled Ravalomanana pushed his wife Lalao to run, but was blocked. His former health minister Robinson Jean Louis is now in the race.

But it may not be over for the Ravalomananas: Jean Louis suggested one of the pair might become prime minister if he won.

Close to 6,000 observers, including 800 foreign monitors, will watch the polls amid worries about the electoral commission's logistical capacity.

Concerns were raised about the safety of ballot papers and boxes, which in some remote rural areas have been entrusted to village chiefs, ahead of polling.

Polling stations will close at 5:00pm (1400 GMT) and early partial results are expected to start trickling in by Friday night.