Brazil called Internet privacy a world priority a day after it and Germany submitted a joint UN text on the issue in reaction to massive US cyberspying. 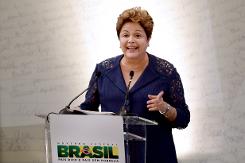 Brazilian President Dilma Rousseff, pictured in Brasilia, on October 30, 2013, called Internet privacy a world priority a day after Brazil and Germany submitted a joint UN text on the issue in reaction to massive US cyberspying

"We consider that privacy on the Internet is part of human rights, and its defense must receive priority treatment in UN discussions," Brazilian President Dilma Rousseff said on her Twitter account.

"The right to privacy cannot be subjected to arbitrary interference, as shown by allegations of (US) spying," she stressed.

Friday, Brazil and Germany submitted a joint draft resolution on the protection of individual liberties to the UN General Assembly's human rights panel in New York, according to Brazilian diplomats in New York.

The text does not explicitly mention the United States. But it calls for necessary measures to end violations of the right to privacy, including in digital communications and to force countries to respect their obligations within the framework of international human rights laws.

It also demands independent national oversight mechanisms capable of guaranteeing the transparency of the state and its responsibility in activities linked to communications surveillance and interception as well as personal data collection.

The text urged UN human rights chief Navi Pillay to present a internal report with recommendations on how to protect the right to privacy at the national and international levels, including massive communications surveillance.

“Nowadays, digital communication is a global affair and thus protection of privacy must be strengthened at the global level," German Foreign Minister Guido Westerwelle said in a statement in Berlin Friday.

"With this initiative with our Brazilian partners we are seeking a broad international alliance for up-to-date privacy protection," he added.

Berlin has been angered by electronic espionage on Chancellor Angela Merkel's cellphone conducted by the US National Security Agency (NSA).

And Brasilia is equally furious over allegations that the NSA snooped on Brazilian government communications, those of state-run energy giant Petrobras, as well as phone calls and emails of millions of Brazilians.

Those disclosures, part of a trove of revelations by US intelligence leaker Edward Snowden, led Rousseff to publicly reprimand the United States at the UN General Assembly session in September and to scrap a planned state visit to Washington.

Brazil is also to host a global summit on Internet governance in April.

Friday, six US tech giants -- Google, Apple, Microsoft, Facebook, Yahoo and AOL -- wrote to the US Congress to press for tighter oversight of the NSA and demand greater transparency on cybersurveillance and tighter protection of privacy.