De-stresssss with a snake massage
World

De-stresssss with a snake massage

JAKARTA - Lying on a massage table at a spa in the Indonesian capital, Feri Tilukay closed his eyes and smiled blissfully as three enormous snakes slithered all over him. 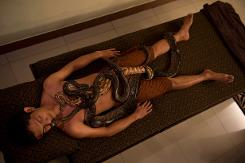 Pythons slither over Indonesian Ferdi Tilukay, a 31-year-old accountant, for a 'snake body massage' in Jakarta, on October 30, 2013

He is one of a small band of customers brave enough to try the "snake massage", where the gentle hands of a professionally trained masseuse are swapped for the cold, scaly skin of 1.8-metre pythons.

"It is a very unique sensation," Tilukay, 31, told AFP, as the snakes slid over him during a recent session on Jakarta, adding the treatment "gives you an adrenaline rush".

Dressed only in a pair of shorts, he seemed completely relaxed as three reptiles named Jasmine, Muscle and Brown got to work on him.

They draped themselves over his neck, rolled around on his stomach and back and occasionally arched their necks and stuck out their forked tongues.

Two masseuses also attended the session to ensure safety and to encourage the snakes -- whose mouths are kept shut with sticky tape -- to move around, making sure they didn't just coil up and stay put in one spot.

Before the 90-minute treatment, which costs 480,000 rupiah (1,300 baht), the snakes are taken out of the plastic boxes where they are kept and cleaned with anti-septic.

While many people who get the massage at the centre, called Bali Heritage Reflexology and Spa, are thrill seekers or just looking for a new experience, a handful, like Tilukay, are trying to get over a life-long fear of snakes.

"I used to be afraid of snakes, I had a phobia. But after getting this treatment several times, the phobia started going away and now I like snakes," said Tilukay, an accountant, who has had three of the sessions.

He is one of the few Indonesian customers with most coming from Europe, Japan or South Korea, according to spa general manager Paulus Abraham.

The spa, which is decorated with wooden furniture in the style of a traditional house on the resort island of Bali, keeps five snakes which are fed a diet of live rabbits.

The snake massage is just one of 300 treatments offered by the centre -- and many others are equally off-the-wall.

In one a staff member dressed in a gorilla suit performs a massage and in another, the customer sits in a bathtub of beer receiving a massage while enjoying a Lager.

But it is the snake massage, which started around a year ago, that has been attracting the most attention as well as a steady stream of customers.

However, animal rights groups have raised concerns, with the Jakarta Animal Aid Network describing the treatment of the snakes as "exploitation".

"We are angry to hear about any kind of animal exploitation, including snakes," group spokesman Benvika, who like many Indonesians goes by one name, told AFP.

Abraham insisted that the snakes were not being ill-treated -- and that they enjoyed the contact with humans that came from the massages.