Nine children were killed and 27 people wounded when mortar rounds hit a school and a school bus in the Syrian capital Damascus on Monday, state television reported. 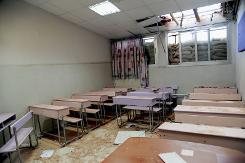 A picture released on November 11, 2013 said to show debris at a classroom in the St. John of Damascus school after it was hit with mortar rounds

"The toll in the terrorist targeting of the St. John of Damascus school with mortar rounds has risen to five dead, all of them children, and 27 injured," a news alert on Syrian state television said.

Another four students were killed when a mortar hit the vehicle they were in, in the central Bab Sharqi district of the capital, state news agency SANA said, adding that the driver was also killed.

Six others inside the bus, including four more students, were wounded in the "terrorist attack," SANA said.

The regime of President Bashar al-Assad uses the blanket term "terrorists" to refer to the opposition.

Earlier, the interior minister told the official Al-Ikhbariya channel that 11 children had been hurt at the school in the majority Christian district of Qassaa, in central Damascus.

Both incidents took place in majority Christian district of the capital.

Rebel fighters arrayed in districts on the outskirts of the capital regularly launch rockets and mortar rounds at central neighbourhoods, causing damage and sometimes fatalities.

In northern Aleppo province meanwhile, the Syrian Observatory for Human Rights group said at least five people were killed in a suicide car bomb blast in Ain al-Arab, a Kurdish majority town on the Turkey border.