The White House has warned US lawmakers that tightening sanctions on Iran could derail a diplomatic drive for a nuclear deal with Iran, boxing America into a "march to war." 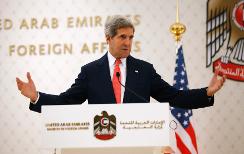 US Secretary of State John Kerry speaks at a news conference with UAE Foreign Minister Abdullah bin Zayed Al Nahyan (not pictured) at the foreign ministry in Abu Dhabi, on November 11, 2013

The remarks Tuesday marked a significant toughening of President Barack Obama's stance towards Congress on sanctions as Washington prepares to resume high-stakes nuclear diplomacy with Iran later this month.

The US president has vowed he will not allow Tehran's leaders to develop an atomic weapon, but last week's negotiations in Geneva between Iran and six world powers failed to reach an interim deal to halt its program.

Fresh from the talks, Secretary of State John Kerry heads to Capitol Hill on Wednesday to make the case for continued diplomacy.

Key senators from both US parties, some responding to Israel's savaging of the proposed agreement, are proposing stiffer sanctions or may curtail Obama's power to ease current measures, which have crippled the Iranian economy.

But the White House said any new sanctions could scupper the diplomatic process and leave little option but the use of military force against Iran.

"The American people do not want a march to war," White House spokesman Jay Carney told reporters, saying US citizens "justifiably and understandably prefer a peaceful solution that prevents Iran from obtaining a nuclear weapon."

"This agreement, if it's achieved, has the potential to do that. The alternative is military action," Carney said.

"If pursuing a resolution diplomatically is disallowed or ruled out, what options then do we and our allies have to prevent Iran from acquiring a nuclear weapon?"

The White House believes in offering Iran some "modest" and "reversible" steps to ease the pain of some sanctions as part of an interim deal to bolster Tehran's negotiators against hardliners who are skeptical of new President Hassan Rouhani's diplomatic opening.

But many US lawmakers believe that tightening sanctions will give the administration more leverage -- and doubt Tehran is serious about standing down its nuclear program.

"The American people should not be forced to choose between military action and a bad deal that accepts a nuclear Iran," he said.

White House aides, however, privately say that once war-weary Americans understand the alternative to a deal with Iran means another Middle East conflict, they will warm to Obama's approach.

Tehran denies Western claims it is trying to develop a nuclear weapon.

Kerry will take the administration's position directly to the Senate Banking Committee, which is mulling a new sanctions package.

"The secretary will be clear that putting new sanctions in place would be a mistake," State Department spokeswoman Jen Psaki said.

"What we are asking for right now is a pause, a temporary pause in sanctions," she told reporters. "We are not rolling them back."

Obama on Tuesday spoke to British Prime Minister David Cameron about last week's proposals in Geneva and "discussed their expectations for the next round of talks," the White House said in a statement.

The House of Representatives has already passed a bill hardening Iran sanctions, but the Senate agreed to delay further action to allow diplomacy a chance to succeed.

Kerry is likely to argue for a further delay, to cover the next round of talks, sources said.

"That's pretty alarmist. Over the top," he told AFP.

Republican Senator Richard Shelby said that the White House warnings over the impact of new sanctions were "wrong."

"We don't know how sincere yet the Iranians are in our whole negotiations," he said.

Senator Michael Crapo, the top Republican on the Banking Committee, told AFP he believes the Senate should "move aggressively forward on our sanctions legislation," although he said he was willing to listen to Kerry's arguments Wednesday and his details on the Geneva negotiations.

Republican Senator Pat Toomey told AFP that "really tough sanctions" were the only way to bring Iran to the table "in a meaningful way and get them to agree to end their program."

Colin Kahl, director of the Middle East Security Program at the Center for a New American Security, said Congress was warming to the idea that sanctions pressure got Iran to the negotiating table and "more pressure will get them over the goal line."

But Trita Parsi, president of the National Iranian American Council, said new sanctions could seriously limit Rouhani's ability to maintain his "soft position" on the negotiations.

A balloon clouds US view on Xi's China