A US drone killed six people in northwest Pakistan on Thursday, including a senior leader of the ruthless Haqqani network, officials said, in only the second such strike outside the country's lawless tribal districts. 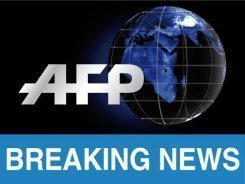 Pakistani Islamic students gather at a destroyed religious seminary belonging to the Haqqani network after US drone strike in Hangu district, Khyber Pakhtunkhwa province, on November 21, 2013

The missile attack hit a religious seminary that militants and security officials said belonged to the terror outfit -- blamed for some of the deadliest attacks in neighbouring Afghanistan -- in the Hangu district of Khyber Pakhtunkhwa province.

Haqqani sources told AFP that the network's spiritual leader, Maulana Ahmad Jan, was among those killed at the seminary, which they said was a rest base for militants fighting NATO forces in Afghanistan.

Earlier this month, the network's chief financier, Nasirudddin Haqqani, was gunned down in mysterious circumstances in a village on the edge of Islamabad.

As it usually does after drone strikes, the government condemned the attack as a violation of sovereignty and counterproductive to efforts to end militancy.

Thursday's strike was the first time a US drone hit a district inside Khyber Pakhtunkhwa. The only previous strike outside the tribal areas came in Bannu district, a so-called "frontier region".

It was also the first in Pakistan since Pakistani Taliban chief Hakimullah Mehsud was killed in a similar strike in the North Waziristan tribal district on November 1.

That attack prompted a furious response from Pakistan, with the interior minister accusing Washington of sabotaging fledgling peace efforts with the Taliban and opposition parties calling for a blockade of NATO supply lines to Afghanistan.

Two local security officials identified two of the dead as Jan and Mufti Hameedullah and said they were both members of the Haqqani network.

Several senior Haqqani sources confirmed the death of Jan, aged in his 60s. An Afghan Taliban source said the five others killed in the strike were also militants.

"He was the spiritual leader and head teacher of the Haqqani network," one source told AFP, adding that Jan was a member of the group's ruling council.

"He was receiving people who were coming to condole the death of Nasiruddin Haqqani because followers of were not able to meet any other member of Haqqani family."

Another Haqqani source said the seminary was an important rest point for members fighting in Afghanistan's restive Khost province.

"The seminary served as a base for the network where militants fighting across the border came to stay and rest, as the Haqqani seminaries in the tribal areas were targeted by drones," the source told AFP on condition of anonymity.

Washington has long demanded that Pakistan take action against the Haqqanis, who are blamed for numerous bloody attacks in Afghanistan including one on the US embassy in Kabul in 2011.

US officials have in the past accused Pakistani intelligence agencies of links to the Haqqani network, which has bases in the tribal districts.

Since 2004 the United States has carried out hundreds of missile attacks from unmanned aircraft on suspected militants linked to the Taliban and Al-Qaeda.

The vast majority of them have hit targets in the seven tribal areas bordering Afghanistan, which have a separate legal and political governance system from the rest of the country.

The number and identity of casualties is often hard to determine because the tribal areas are off-limits to foreign journalists and aid organisations, but the London-based Bureau of Investigative Journalism estimates deaths at between 2,500 and 3,700.

Hundreds of civilians have died in the attacks, according to various estimates, prompting outrage in Pakistan and abroad.

A major report last month from rights campaigners Amnesty International said the US may be guilty of war crimes.

The Pakistani government officially condemns drone strikes as a violation of its sovereignty, and last month Sharif urged US President Barack Obama to halt the programme during a meeting in Washington.

Cricketer-turned-politician Imran Khan has been vociferous in his criticism of US drone strikes and his Pakistan Tehreek-e-Insaaf (PTI) party, which leads the province where the latest occurred, is planning a protest rally against them on Saturday.

PTI's information secretary Shireen Mazari called the latest drone strike a "declaration of war against the people of Pakistan".

Despite their deep unpopularity in Pakistan, the US sees them as a vital tool in the fight against militants in the tribal areas.