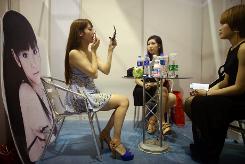 Japanese adult video actress Mizuna-Rei applies makeup on November 9, 2013, before making an appearance during the Guangzhou Sex Culture Festival in the southern Chinese city of Guangzhou

Rei Mizuna was in China to corner her share of its money-spinning sex product market.

The rowdy scene at the Guangzhou National Sex Culture Festival was a graphic illustration of how sexual taboos are loosening in the once deeply conservative country -- and the opportunities for those able to exploit it.

China is estimated to make more than 80 percent of the world's sex toys, with one million people employed in the industry, but an increasing proportion of the products are staying in the country to feed domestic demand.

An adventurous generation of young, mainly urban Chinese are pushing back the frontiers of what is accepted, adopting attitudes far removed from the puritan days of radical Communist rule their parents lived under.

Pornographic videos are banned in China, but softer varieties and the wider sex product industry is booming.

Elsewhere electronic gadgets emitted shrieks of sexual rapture while younger men barged their way through tiny, crowded booths, sifting through rows of outfits for nurses, French maids and policewomen, and huge bins full of ladies briefs as if seeking out ripe apples at a fruit market.

Sexual inhibitions are left at the door of the annual event, along with sexual partners for all but a few of the largely male visitors.

"We just came here to have a look around," said one young man, clutching bags of women's clothes, small tubs of cream and a huge supply of free condoms.

He was among a hundreds-strong crush of people who waited for more than three hours to see Mizuna take the stage, handing out condoms and letting one lucky admirer peck her on the cheek.

More than 2,000 sex shops have been set up in each of Beijing and Shanghai since laws were relaxed in 1993, according to state-run media, and the market for sex toys is growing at 63 percent a year.

"Our industry has changed a lot," said Cheng Zichuan, owner of Hitdoll, one of China's top sex doll manufacturers.

Consumer attitudes had developed dramatically since the company was set up six years ago, he added, sitting in the back seat of a speedboat next to a 38,000 yuan (US$6,200) flame-haired sex doll called Lydia, which has technologically advanced hands.

"They all thought these products were too expensive and there was no place to buy them, and they would feel disgraced if the family saw the dolls," he told AFP.

"Now they don't mind, they buy the dolls if they like them and enjoy it," he said, adding that he sold up to five a month, mainly to rich single men who do not want to "randomly hire prostitutes" and lonely widowers -- who often buy dolls custom-made to resemble their late wives.

Recent studies show the Chinese are not only becoming more adventurous in the bedroom, but are also more willing to have sex before they make firm relationship commitments.

More than 70 percent claimed to have had pre-marital sex in a report last year by a prominent Chinese sexologist, a huge leap from 40 percent in 1994 and 15 percent in 1989.

But the legal framework surrounding sex has yet to adapt to changing social mores.

China's minimum age for marriage stands at 22 for men and 20 for women -- the highest in the world.

But there are strict laws restricting condom advertising and officially China remains "quite conservative", he added, to the sound of electronically-generated howls of ecstasy.

Montrealers shrug off the cold to dance and party at Igloofest