A Europe badly shaken by a faltering economy and rising populism is set to commemorate the centenary of Word War I, the conflict still known as the "Great War" that scarred the continent and shaped the 20th century. 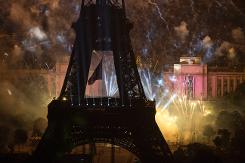 Fireworks burst around the Eiffel Tower in Paris, on July 14, 2013, as part of France's annual Bastille Day celebrations

Commemorations for the 1914-18 Great War are planned through the summer on either side of the Western Front, but with no single event bringing all of the former foes together.

Plans for a major gathering in Sarajevo -- where the assassination of the Austro-Hungarian heir Franz Ferdinand by a Serbian nationalist is seen as sparking the conflict in June 28, 1914 -- had to be dropped due to a lack of international consensus.

Europe was left ruined by four years of all-consuming warfare, but while European nations shared in the trauma of what some historians called a collective "suicide", how they remember the Great War varies greatly.

Europeans "continue to approach this transnational event through the narrow framework of national memory", explained the Australian historian John Horne, of Dublin University.

For the British and French, World War I is vividly etched in the collective imagination as a just and necessary victory, secured at a terrible human cost.

Remembering the war is a big deal in France and Britain, as well as in Australia and New Zealand whose very sense of identity is tied to the conflict, with hundreds of official projects and wall-to-wall media coverage.

In Germany and Russia, by contrast, the Great War's memory was all but supplanted by the cataclysm of World War II, two decades later.

The centenary also comes as the very idea of a shared European future is under attack, with eurosceptics, nationalists and the far-right gaining ground across the continent as the eurozone heads into a fourth year of economic crisis.

Delegations from the warring parties in World War I have been invited to France for a "peace demonstration" on Bastille Day, July 14. The presidents of Germany and France, Joachim Gauck and Francois Hollande, will also stand side by side in France on August 3 to mark the start of the war "with gravity and reverence".

And a German-British ceremony is planned the following day in Belgium, invaded by German troops on the first day of the war, August 3, 1914.

But in Germany itself, as in Italy and central Europe, the centenary has so far gone largely unnoticed.

The diversity of national memories makes it difficult -- if not impossible -- for all the former foes to commemorate the war together, historians explain.

"It is a different experience for each country," argued the German historian Gerd Krumeich, proof that "there is no such thing as a common European mindset or sensitivity, Europe very much remains a rational idea."

The Bosnian capital will be hosting a string of cultural events, organised by France and Germany.

But neighbouring Serbia -- which resents the notion that Serbian nationalism was to blame for triggering the war -- wants to use the centenary as a chance to set the record straight, and lay historical responsibility squarely with the Austro-Hungarian empire.

Vladimir Putin's Russia, meanwhile, has seized on the chance to fan national pride, reviving the memory of a war it says was unjustly forgotten under the Soviet regime -- which today's Russian rulers accuse of bowing shamefully to Germany in 1917.

The Great War dragged almost half the world's population into a cycle of violence of unprecedented scale and intensity.

Over the course of 52 months, it left some 10 million dead and 20 million injured and maimed on battlefields that sprawled from the howling North Sea coast to the Russian steppes and the deserts of the Middle East.

Millions of civilians perished under occupation, through disease, hunger or deportation, including a million Armenians systematically massacred by Turkish forces.

Four of the world's most powerful empires -- Russian, German, Austro-Hungarian and Ottoman -- collapsed as the world map was redrawn, giving rise to dozens of new nation states.

World War I fanned the emergence of many of the ideologies that were to fashion the 20th century, and its looming conflicts: Communism, Fascism, Nazism, anti-colonialism, pacifism.

And Europe's economic and political ruin cleared the way for the rise of a new economic and military superpower, the United States, which was to dominate the second half of the century.