Syria will miss a December 31 deadline for the removal of part of its chemical weapons arsenal for destruction, but international inspectors insisted the overall mission is still on track. 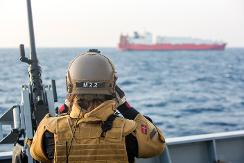 This picture released by the official Syrian Arab News Agency (SANA) on December 30, 2013 shows residents of Adra, northeast of Damascus, being evacuated from the city

The delay came as the Syrian Observatory for Human Rights said more than 130,000 people had been killed since the conflict began in March 2011, with the overwhelming majority caused by conventional arms.

The prospects for a peace conference slated for next month appeared to dim further, with Syrian media reporting the delivery of invitations to the meeting had been delayed.

Syria had been due to turn over some of the deadliest chemicals in its arsenal to ships by the end of the year, for delivery to a US boat which is to destroy them at sea.

But Norwegian and Danish vessels that had been waiting off the Syrian coast returned to port in Cyprus late Monday as it became clear the mission would not go ahead as scheduled.

Lars Hovtun, a spokesman for the Norwegian ship HNoMS Helge Ingstad, gave no new date for the mission to escort the dangerous cargo out of Syria.

"We are still on high alert to go into Syria," he said. "We still don't know exactly when the orders will come."

The international disarmament mission in Syria has acknowledged it is "unlikely" the weapons can be transported to Latakia port in time for the December 31 deadline.

But the Organisation for the Prohibition of Chemical Weapons remained positive, saying the overall plan to rid Syria of its chemical arsenal was on track.

"Syria's chemical arsenal has been completely neutralised, the chemical agents and chemical products are under international control, have been sealed... The effective dismantling of the production and filling plants is on course.

"Their capacity to produce and use chemical weapons has been reduced to zero."

Chartier said the operation was still on track to meet a deadline to rid Syria of its chemical arsenal by mid-2014.

Nevertheless, the head of the disarmament mission, Sigrid Kaag, called on all parties including Damascus to "intensify efforts" to destroy Syria's chemical arsenal within the timetable.

Kaag told AFP the delay was the result of various obstacles and underlined the complexity of dismantling a chemical weapons programme in an active war zone.

The Syrian Observatory for Human Rights said the death toll from nearly three years of war now stood at 130,433 people, including some 46,266 civilians.

The dead also include 29,083 rebels, among them Al-Qaeda loyalists, and 52,290 pro-government forces, including fighters from Lebanon's Shiite Hezbollah movement.

The deaths include hundreds killed in an August 21 chemical weapons attack outside Damascus, which saw the United States threaten military action against Syria in response.

In violence on Tuesday, the Observatory said at least 15 people were killed when a regime tank shell hit a bus in the northern city of Aleppo.

The threat was headed off by a US-Russian deal under which Syria joined the Chemical Weapons Convention and agreed to turn over its chemical weapons for destruction.

Addressing parliament on Tuesday, Prime Minister Wael al-Halqi said his government was complying with its obligations.

"We were able to accomplish what was agreed upon, destroying the chemical production and mixing sites," he said.

"Now we have started collecting these materials so they can be transferred to the Syrian ports and taken to other places and destroyed within a timeframe that Syria has committed to."

On the diplomatic front, a Syrian official told Al-Watan newspaper invitations had not been sent for the peace conference scheduled for January 22 in the Swiss town of Montreux.

The source said invitations were to have been sent by December 28, and the delay was "the result of the floundering efforts to form a delegation representing the 'opposition'".

The opposition National Coalition has yet to officially announce it is attending the conference, and there are questions about whether staunch regime ally Iran will be invited.

In his year-end address to parliament, the Syrian premier said Damascus was on course for major diplomatic "victories" -- including in Montreux -- thanks to staunch support from long-standing allies China, Iran and Russia.