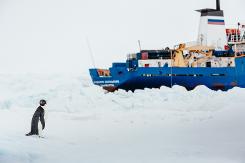 Passengers link arms and stamp out a helicopter landing site on the ice near the MV Akademik Shokalskiy (back R), still stuck in the ice off eastern Antarctica, as the ship waits for a possible helicopter rescue, December 31, 2013

The Akademik Shokalskiy, carrying 52 passengers and 22 crew, has been trapped in pack ice 100 nautical miles east of the French base Dumont d'Urville since December 24.

An Australian government supply ship, the Aurora Australis, admitted Tuesday it was unable to break through, forcing a more complex helicopter rescue.

Attempts to launch the airborne rescue were called off Wednesday because of adverse conditions.

But in a message posted Thursday on its official Twitter account, the Australian Maritime Safety Authority (AMSA) said a rescue effort could soon start.

"Wind in the area is now down to 10 knots and visibility has improved," the statement said.

"Weather conditions are expected to remain favourable over the next 36 hours."

The announcement will be a source of much-needed cheer for the mixed group of scientists, journalists and tourists, mostly Australians and New Zealanders, on board the stranded vessel.

However, AMSA warned: "This rescue will be a complex operation involving a number of steps and subject to factors such as weather."

Australian authorities, who are coordinating the rescue, plan to use a helicopter on board the Chinese-flagged icebreaker Xue Long to bring the passengers off the boat, leaving behind the crew members.

They would then be taken by barge from the Xue Long to the Aurora Australis.

The captains of the ship would decide exactly when to launch the helicopter-led rescue, AMSA said.

"Passengers will be rescued by helicopter in groups of 12 and will be initially transported to the Xue Long (Chinese icebreaker).

"The rescue is expected to be undertaken in a total of seven flights. The first five flights will rescue passengers and the remaining two flights will transfer luggage and equipment.

"Each return flight is expected to take about 45 minutes. The journey will cover a distance of about 12 nautical miles between the MV Akademik Shokalskiy and the Xue Long.

"The helicopter component of the rescue operation is expected to take at least five hours dependent on weather conditions," AMSA said.

Although the ship is well provisioned and not in any immediate danger, the Russian crew have had to spend Christmas and New Year marooned amid snow storms and blizzards and are preparing to wait until the ice breaks up.

"The (Russian) master has chosen for the crew to remain on board... to keep the ship operational," AMSA official John Young told a telephone press conference.

Passengers on the stranded ship had been following in the footsteps of Australian Sir Douglas Mawson and his 1911-1914 expedition.

"We understand that all passengers continue to be in fine spirits and still have adequate food supplies on the vessel," AMSA official Lisa Martin," told the press conference.

The team has been carrying out the same scientific experiments that Mawson's group conducted during their expedition, partly in an attempt to discover how quickly the Antarctic's sea ice is disappearing.

The authorities estimate the passengers would not reach land in Tasmania before mid-January at the earliest.