The governments of Panama and Spain scrambled Friday to resolve a dispute with a consortium threatening to halt expansion work on the Panama Canal over a $1.6 billion cost overrun. 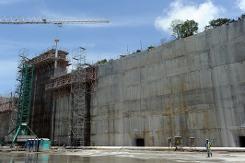 File picture shows a ship carrying four new gates for the Panama Canal heading for the port of Colon, west of Panama City, on August 20, 2013

The president and minister will meet on Monday with Panama Canal Authority Administrator Jorge Quijano.

Martinelli spoke after hour-long talks with senior Spanish and Italian diplomats at his presidential office, describing the meeting as "very successful."

"We will keep talking. The three governments want this work to conclude and that any anomaly be corrected," he told reporters.

The suspension threat has infuriated Martinelli, who said Thursday that he would travel to Spain and Italy to tell each government that they have a "more responsibility" to make GUPC honor its contract.

But he said Friday that his trip would now depend on the results of his meeting with Pastor and Quijano.

"I will go anywhere to defend the interests of Panama," Martinelli said.

Silva told reporters that the Spanish government offered its "good offices to find a solution."

"This is not a diplomatic conflict," he said. "The Spanish government is not part of this conflict. We will help mediate a solution so that the canal expansion opens to the world."

Tudini said there was "willingness to find a solution through dialogue."

In a letter to canal authorities dated December 30, Sacyr gave a 21-day deadline for Panama to pay the extra charges or they will suspend its $3.2 billion contract to expand the capacity of canal.

The overall cost of the project has been estimated at $5.2 billion.

The consortium began work on a third set of locks for the canal in 2009 and expects to complete construction in June 2015, already a nine-month delay over the date set in the contract.

A year ago, GUPC demanded an extra payment of $1.6 billion from the Panama Canal Authority for "unforeseen" costs.

But according to the canal authority, there was a delay of four months shortly after the project began to reverse a GUPC plan to use lower-quality cement.

The new locks will accommodate larger ships with a capacity of 12,000 containers -- instead of those with 5,000 containers that are now able to navigate the canal.