Iraq is preparing a "major attack" on militant-held Fallujah, a senior official said Sunday, spelling another assault for the city west of Baghdad where US forces repeatedly battled insurgents. 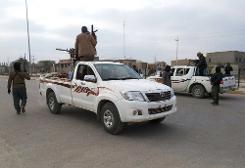 A man flashes the V-sign for victory as he stand on top of a burnt-out lorry on the side of the main highway leading west out of Baghdad to Fallujah, on January 5, 2014

Washington said it would help Baghdad in its fight against Al-Qaeda-linked militants but that there would be no return of US troops, and Iran on Sunday also offered assistance.

The takeover of Fallujah and parts of Anbar provincial capital Ramadi, farther west, is the first time militants have exercised such open control in major cities since the height of the bloody insurgency that followed the US-led invasion of 2003.

"Iraqi forces are preparing for a major attack in Fallujah," a senior official told AFP.

Special forces have already conducted operations inside the city, the official said.

The regular army has paused on the edge of Fallujah to allow residents time to leave, after which it will launch "the attack to crush the terrorists".

Fallujah is in the hands of fighters of the Al-Qaeda-linked Islamic State of Iraq and the Levant (ISIL), a senior security official said on Saturday.

US Secretary of State John Kerry said on Sunday that Washington would provide assistance to Iraqi forces in their battle against the militants but that it was "their fight".

He said Washington was "very, very concerned" about the resurgence of ISIL but was not contemplating any return of US ground troops, after their withdrawal in December 2011.

"We are not obviously contemplating returning," but "we are going to do everything that is possible to help them", he told reporters in Jerusalem.

Iran also offered assistance, with deputy chief of staff General Mohammad Hejazi saying that "if the Iraqis ask, we will supply them with equipment and advice, but they have no need of manpower".

'Wait for what is coming'

ISIL seized control of the village of Bubali near Ramadi after heavy fighting on Sunday, a witness said.

AFP journalists reported sporadic clashes both inside Ramadi and on Fallujah's outskirts.

Majeed admitted that "we do not know what is happening in Fallujah", but said the city should "wait for what is coming" -- a reference to the impending assault.

On Friday and Saturday, more than 160 people were killed in the worst violence to hit Anbar province in years.

Both Ramadi and Fallujah were insurgent strongholds in the years after 2003, and Fallujah was the target of two major assaults in which US forces saw some of their heaviest fighting since the Vietnam War.

American troops eventually wrested back control of Anbar from militants, with the support of Sunni Arab tribesmen of the Sahwa militia, who joined forces with the US from late 2006.

American forces suffered almost one-third of their Iraq dead in Anbar, according to independent website icasualties.org.

But two years after US forces withdrew, the power of militants in Anbar is increasing.

Fighting erupted in the Ramadi area on December 30, when security forces cleared a year-old protest camp where Sunni Arabs demonstrated against what they see as the marginalisation and targeting of their minority community by the Shiite-led government.

The violence then spread to Fallujah, and the subsequent withdrawal of security forces from parts of both cities cleared the way for militants to seize control.

Prime Minister Nuri al-Maliki had long sought the closure of the protest camp outside Ramadi, dubbing it a "headquarters for the leadership of Al-Qaeda".

But its removal has caused a sharp decline in the security situation.

ISIL is the latest incarnation of Al-Qaeda's Iraq affiliate and has made a striking comeback this year, taking advantage of widespread Sunni discontent and the civil war in neighbouring Syria, where it has become a major player in the nearly three-year-old conflict.

Violence in Iraq last year reached a level not seen since 2008, when the country was just emerging from a brutal period of sectarian killings.

Three car bombs and a roadside bomb exploded in three areas of Baghdad on Sunday, killing at least 15 people and wounding at least 40, officials said.