Bruce Springsteen's 18th studio album "High Hopes" went online in the United States, nine days before its general release -- and on the 41st anniversary of The Boss's debut outing. 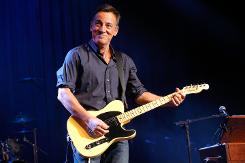 Bruce Springsteen performs at the 7th annual 'Stand Up For Heroes' event at Madison Square Garden in New York, on November 6, 2013

Television network CBS had announced it would host the Internet-only pre-release at www.cbs.com/shows/the_good_wife/springsteen after the conclusion of this week's episode of "The Good Wife" at around 10:00 pm (0300 GMT Monday) in a unique tie-in with the top-rated legal drama.

But American fans of the New Jersey-born rock 'n' roll voice of blue-collar America – whose first album "Greetings from Asbury Park, N.J." came out on January 5, 1973, two years before "Born to Run" established him as a musical powerhouse – were delighted to discover the audio stream unexpectedly going online earlier in the evening.

"Once again, Springsteen is the minister in the chapel, offering guidance, sympathy and, occasionally, a raised fist of solidarity with the dispossessed," wrote pop music critic Tris McCall of the Star-Ledger newspaper in Springsteen's home state.

"By the time that track draws to its haunting conclusion, you'll likely find that despite the rocky start, the album's familiar themes of hope, redemption and love's ability to trump adversity have worked their magic the way they do on any good Springsteen release," added Pete Chianca at Blogness on the Edge of Town, a blog devoted to the 64-year-old rock icon.

As a CBS spokeswoman told AFP this week, the online stream is available only in the United States, ahead of the general release of "High Hopes" on January 14.

In Paris, only the title track -- released in November as a video -- could be heard on the website; the other 11 songs came up as "currently not available."

Some lucky fans already have "High Hopes" -- Springsteen's first album since "Wrecking Ball" in 2012 – on their personal digital players after it briefly leaked out on Amazon.com as an MP3 download last weekend. No explanation has been given for the apparent snafu.

Springsteen's label is Columbia Records, a Sony Music Entertainment subsidiary formerly owned by CBS that was behind the surprise online release of Beyonce's eponymous fifth album on December 13. That record remains on top of the Billboard 200 chart, having sold more than 1.3 million copies.

Eagerly anticipated, "High Hopes" is a mix of cover versions, studio outtakes and re-recordings that Springsteen – who has concerts upcoming in South Africa, Australia and New Zealand — has called "music I always felt needed to be released," although he's already played many of the numbers live.

Three songs will feature on next week's episode of "The Good Wife," after Sunday's program -- which ran in the same time slot as the season premiere of "Downton Abbey" on public television -- ended with an invitation to viewers to log on to the audio stream.

Nine tracks on "High Hopes" feature Rage Against the Machine's Tom Morello, who stood in for guitarist Steve Van Zandt on Springsteen's tour of Australia last year, and two include Clarence Clemons, the much-loved E Street Band saxophonist who died in 2011 at the age of 69.

"Down in the Hole" has Springsteen's children on backing vocals -- including his youngest Sam, who turned 20 on Sunday.

Among the three cover versions, Springsteen takes Suicide's "Dream Baby Dream" and makes it so much his own, it's hardly recognizable from the minimalist original released in 1980 by the seminal New York electropunk duo.