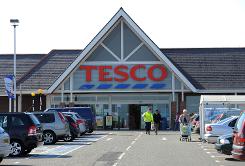 The Tesco supermarket in Holyhead, Anglesey is pictured on March 25, 2011

Tesco said sales at stores open more than a year dropped by 3.2 percent in the six weeks to January 4 from the figure for the equivalent period one year earlier, as it continued to suffer from tough conditions at home and abroad.

Sales across all of its stores dropped 1.6 percent in the reporting period, the company said in a trading statement.

Tesco added that it expected annual trading profit to come in lower compared with 2012/13. Its share price slid nearly four percent in reaction.

Chief executive Philip Clarke noted that "further weakness in the grocery market as a whole continued to impact" Tesco's performance in its main market Britain.

"Our overseas performance has improved since the third quarter, driven by an improving trend in Europe. This is despite continuing external challenges, including the recent political disruption in Thailand," he said.

Tesco added in Thursday's statement: "Reflecting our continued investment for customers in challenging conditions for the UK market as a whole, we now expect to report full year results within the range of current market expectations."

But revenue from general merchandise, comprising mainly clothing, rose 0.5 percent during the group's 'Christmas trading', or eight weeks to December 24. Food sales rose also during this period, M and S said in a statement.

"Given continued pressure on disposable incomes, we remain cautious about the outlook," the group added.

While British economic growth is on the rise, thanks to a housing market revival amid cheap home loans, government cutbacks continue to bite, forcing many Britons to rein in consumer spending.

Finance minister George Osborne this week warned that the country had to find an extra pound sterling25 billion ($41 billion, 30 billion euros) of cuts after next year's general election.

"Putting the disappointing (retail sector) numbers aside, the macro improvement in the UK economy clearly isn't being reflected for the consumers who remain cash-strapped as wage rises are not up with inflation," Joe Rundle, head of trading at ETX Capital, said on Thursday.

Britain's largest supermarkets are meanwhile also faced with increased competition from discount rivals Aldi and Lidl, pushing the likes of Tesco and Sainsbury's to improve their online and household delivery operations to attract customers.