The United States said Friday that it "deeply regrets" India's expulsion of a US embassy official in New Delhi in a bitter diplomatic dispute, but is seeking to patch up relations. 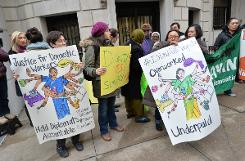 A group supporting domestic workers' rights demonstrate across the street from the Indian Consulate General in New York on December 20, 2013

Ties have become increasingly frayed since December 12 when Indian consulate worker Devyani Khobragade was arrested in New York for alleged visa fraud and making false statements relating to the employment of a domestic servant.

India asked the US to withdraw an embassy official earlier Friday in a fresh retaliatory measure, just as the row over the arrest appeared to have cooled.

"We deeply regret that the Indian government felt it was necessary to expel one of our diplomatic personnel," US State Department spokeswoman, Jen Psaki, said.

She confirmed that the official, who has not been identified, would be leaving his post at India's request.

Khobragade was charged in a New York court on Thursday, but was granted full diplomatic immunity by Washington shortly beforehand, which allowed her to return home. She arrived back in New Delhi on Friday.

Psaki said that the charges remained in place, and that her diplomatic immunity expired on returning to India.

No return to US

Khobragade will not be allowed to return to the US unless she surrenders to the court on arrival, and her name is being placed on American visa and immigration watchlists "to prevent the routine issuance of any future visa", Psaki added.

It was also possible that a warrant could be issued for her arrest now she has left the United States.

Khobragade's lawyer Dan Arshack told AFP that she was pleased to be returning to India.

"Her head is held high. She knows she has done no wrong and she looks forward to assuring that the truth is known," he said.

Speaking to reporters at New Delhi's Indira Gandhi international airport, her father, Uttam Khobragade, said: "She has arrived and is very relaxed and happy. We are overwhelmed by the country's support."

The expelled American diplomat was a "similar rank" to Khobragade and is suspected of having helped the family of her maid travel to America where they were granted protection by prosecutors.

US prosecutors said that the family of the maid were evacuated from India to the United States because of attempts to intimidate them.

Khobragade's arrest outside her children's school and treatment in custody, where the mother-of-two said she was subjected to a cavity search, outraged India which claimed she benefited from diplomatic immunity.

US prosecutors disputed this because she was a consular employee, and not a ranking embassy official.

They filed charges in New York and accused Khobragade of sometimes forcing the maid to work 100-hour weeks, even when sick and often without a day off, for pay as little as $1.22 an hour.

The maid herself, Sangeeta Richard, issued a statement thanking rights groups and US officials for their support.

A fight between allies

India and the United States have embraced each other as strategic partners, but the last few weeks have pummelled what US President Barack Obama's once described as "one of defining partnerships of the 21st century."

India has removed extra security barriers at the US embassy in New Delhi, demanded contract details for domestic staff employed by American diplomats and even stopped the mission importing duty-free alcohol.

The United States has invested heavily in improving ties with India, which it views as a key ally in its "pivot" to Asia, designed to check Chinese influence.

India has benefited from US backing to gain access to foreign nuclear energy technology and Washington has become an important arms supplier and market for India's software and IT services.

In New York on Thursday, Preet Bharara, the US attorney for the southern district of the city, informed a judge that a grand jury had filed two counts against Khobragade, of visa fraud and making false statements.

In the indictment, the grand jury said Khobragade had obtained a visa for her maid by promising to pay her $4,500 a month, but then made a second secret contract with a salary of just 30,000 rupees ($573) a month.

A statement from the Indian foreign ministry on Thursday read: "At the time of her departure to India, counsellor Khobragade reiterated her innocence of charges filed against her."