Ariel Sharon, who died on Saturday aged 85, was one of Israel's most skilled but controversial political and military leaders, whose ruthless methods earned him the moniker "The Bulldozer". 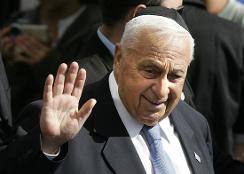 The veteran soldier fought in all of Israel's major wars before embarking on a turbulent political career in 1973 which ended dramatically in January 2006 when he suffered a massive stroke and subsequent coma, from which he never recovered.

Long considered a pariah for his personal but "indirect" responsibility for the 1982 massacre of hundreds of Palestinians by Israel's Lebanese Phalangist allies in Beirut's Sabra and Shatila refugee camps, Sharon was elected premier in 2001.

One of the last members of the generation which founded the Jewish state 1948, he leaves a complex legacy which saw him push through a policy of separation from the Palestinians, orchestrate Israel's unilateral withdrawal from Gaza in 2005 and begin building the sprawling West Bank barrier in 2002.

Born in British-mandate Palestine on February 26, 1928, to parents from Belarus, Sharon was just 17 when he joined the Haganah, the pre-state militia that fought in the 1948 war of independence and eventually became the Israeli army.

Known throughout his military career for his boldness, Sharon also had a stubborn sense of independence.

As head of the elite commando unit 101, he engaged in punitive reprisal raids against Arab forces, the most grisly of which ended with the deaths of some 60 civilians in the Palestinian village of Qibya near Ramallah in 1953.

During the 1967 Six-Day War, when Israel seized the West Bank and Gaza, east Jerusalem and part of the Golan Heights, Sharon led a tank division.

And six years later, during the 1973 Yom Kippur war, he was called out of retirement to lead troops across Egypt's Suez Canal, cementing his reputation as a war hero.

Nurturing the seeds of settlement

A year earlier, Sharon had left the military to enter politics, helping found the rightwing Likud party under the leadership of Menachem Begin which surged to power in 1977.

As agriculture minister, he was instrumental in nurturing the Israeli settlement growth in the occupied West Bank.

In 1982, as defence minister, Sharon masterminded Israel's disastrous invasion of Lebanon, when troops besieged the Beirut headquarters of the Palestine Liberation Organisation.

Although the PLO was forced out of Beirut, its leader Yasser Arafat escaped unharmed, a regret Sharon said plagued him for decades.

The Sabra and Shatila killings ended his term as defence minister after an official enquiry found him "indirectly responsible".

In 1999, the burly former general's political fortunes turned again as he took over Likud, then in opposition.

A year later, on September 28, 2000, Sharon made a provocative visit to the flashpoint Al-Aqsa mosque compound in Jerusalem's Old City, sparking the outbreak of the second Palestinian intifada.

Swept to power in 2001 by an electorate traumatised by suicide bombings, Sharon threw his weight behind the "war on terror", laying siege once again to Arafat, this time at his headquarters in Ramallah which he left only in 2004, dying in France shortly afterwards.

Rumours he had been poisoned by Israel were officially denied.

Ever the maverick, Sharon later broke with his life-long convictions and rightwing nationalist allies to push through an unprecedentedly bold plan to withdraw Israeli troops and 8,000 settlers from the Gaza Strip.

His decision to "disengage" from Gaza and its 1.5 million Palestinian inhabitants was motivated by the fear that demographic realities meant Israel would not long be able to maintain a Jewish majority if it continued to retain territories seized in the Six-Day War.

Accused by former allies of "treason" over Gaza, Sharon abandoned his political home in Likud in November 2005 to found the centrist Kadima party with the idea of making further withdrawals from the West Bank.

But just six weeks later, on January 4, 2006, he suffered a massive stroke at the height of his political career.

He never recovered, and his political legacy has split the right.

Away from politics, Sharon was a passionate farmer, but his life was blighted by tragedy.

Twice widowed, his first wife Margalith died in a car crash in 1962. His second wife, Margalith's younger sister Lily, died of cancer in 2001.

One of his three sons died in 1967 after being shot while playing with his father's rifle, and another went to jail over election campaign finances.

But Sharon never lost his dry sense of humour.

Asked by reporters after a failed 2002 strike against top Hamas militant Mohammed Deif to comment on reports that Deif had planned to assassinate him, Sharon replied with a straight face: "Why would he want to do that?"

Twitter down in Turkey as quake response criticism mounts

'I shouted their names': the hole left by Nigeria's disappeared

Biden says US not seeking conflict with China, despite balloon flap