A Turkish parliamentary committee has given its backing to controversial legislation aimed at imposing strict controls on the Internet, media reports said Thursday. 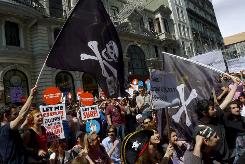 Thousands of people march on May 15, 2011 in Istanbul to protest against Internet filter system

The proposed measures have raised concerns in Turkey about censorship moves by the embattled government of Prime Minister Recep Tayyip Erdogan.

The government ministry which submitted the bill said it is aimed at protecting people's privacy and blocking Internet content such as pornography and child sex abuse.

But opponents say it will allow officials to keep a record of the activities of Internet users and block keywords deemed problematic by the authorities.

The legislation was approved by the budget and planning committee and is expected to be formally given parliament's green light in the next few weeks, the Anatolia news agency said.

"The articles related to the Internet demonstrate how dangerous a turn government attempts at censoring the Internet have taken," said Tayfun Sirman, head of the Internet Publishers' Association.

The ruling Justice and Development Party (AKP) has however rejected comparisons with Beijing which is notorious for its censorship of the Internet and social media sites through its so-called Great Firewall of China.

However, freedom of expression remains a concern of Ankara's key allies including the European Union, which Turkey has long sought to join.