The prime mover in organising Kiev opposition protesters in bloody clashes with the security forces has been a shadowy far-right group called Right Sector rather than Ukraine's established anti-government leaders. 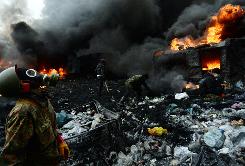 The trio of opposition leaders who spearheaded two months of anti-government protests since late November were taken by surprise by the clashes that broke out on Sunday, blaming the authorities for the unrest but steering clear of condoning violence by the protesters.

Instead the main group involved in the clashes has been an organisation known as Pravy Sektor (Right Sector), a group which has an avowed aim of overthrowing the "occupation" regime of President Viktor Yanukovych, if necessary by force.

It seeks to give Ukraine "people's rule" by Ukrainians, free of the slightest trace of Russian influence.

It does not share the mainstream opposition's enthusiasm for EU integration, seeing Ukraine as a strong, independent state.

"We, the nationalists, have to throw off the regime of internal occupation in a revolutionary way, no other way is available," one of its leaders, Andriy Tarasenko, 31, told AFP in an interview in Kiev.

The two months of protests in Ukraine that erupted over the government’s rejection of an EU deal have radicalised in recent days amid the inability of opposition leaders to bring about change.

Little-known until the last days, the group does not seek to cooperate with any of the opposition parties, accusing them of being unable to counter the authorities effectively.

It has no link to Ukraine's traditional ultra-nationalist party Svoboda (Freedom) and its leader Oleg Tyagnybok, who has taken a far lower profile in recent days after the clashes broke out.

"People came out to protest to act, while those (opposition leaders) occupying the stage over two months did everything not to change the situation," said Tarasenko.

Klitschko, Yatsenyuk and Tyagnybok found themselves whistled by protesters at a mass rally on Sunday.

Right Sector -- which includes groups of hard core football fans -- organises its actions on the Internet through Facebook and other social networks.

It is an offshoot of a group named Trident which says it is based on principles of "traditional Ukrainian Christianity and the ideology of Ukrainian nationalism".

Trident says it draws its inspiration from the hugely controversial leader of the anti-Soviet wartime rebel group the Ukrainian Insurgent Army (UPA), Stepan Bandera, whose organisation fought the Soviet authorities in World War II and even into the 1950s.

Ukraine's deputy interior minister said this week that there were at least 500 activists of Right Sector and similar groups in Kiev, living in municipal buildings seized by the protest movement.

Many demonstrators have been outraged by parliament's adoption last week of new anti-protest laws, which make most forms of public protest illegal and ban the wearing of helmets and driving in a convoy of more than five cars.

However, Tarasenko said Right Sector does not believe that the withdrawal of the anti-protest laws or other opposition demands are significant and considers the immediate change of power as the single possible move.

"People came to the Maidan to depose this power. All other requirements are not interesting," said Tarasenko.

Protesters are willing to continue their ultra-radical action until their requirements are met.

"We have no options. We are dealing with criminals who kidnap people, shoot them," he said, alleging serial rights violations by the authorities.

"No compromises are possible with the gang, we or they, either we will win, or they will destroy us," said Tarasenko.

"This is war. Yanukovych should resign. This is our demand."

Egypt tries man over murder of student who refused advances