Polling unit at Ratchathewi district is closed on Sunday morning.

A Thai protest leader was shot dead Sunday as fellow demonstrators besieged polling stations in Bangkok, disrupting advance voting for hundreds of thousands of people before next weekend's general election. 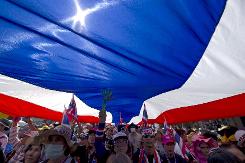 A Thai man casts his vote at a polling station minutes before it got shut down by anti-government protesters in Bangkok, on January 26, 2014

Protesters descended on scores of polling stations in the Thai capital and several southern provinces, stopping ballot officials from entering and prompting election authorities to shut more than 80 venues nationwide.

More than two million people had been registered to vote before the February 2 election, which was called by Prime Minister Yingluck Shinawatra to try to calm rising tensions after weeks of mass anti-government protests.

Around 440,000 of them nationwide were prevented from voting, said Somchai Srisutthiyakorn of the Election Commission, warning that "a similar problem" could afflict next Sunday's poll.

Advance voting is routinely offered for those who cannot cast their ballot on polling day. But Sunday's exercise was seen as a test of the prospects of holding the general election.

As the advance polls closed, an anti-government rally leader was gunned down while he gave a speech from the back of a pickup truck in the Bangkok suburb of Bang Na.

Nine other people were injured in the shooting, according to the city's Erawan emergency centre, with the violence deepening doubts over whether next weekend's ballot can go ahead.

Protest spokesman Akanat Promphan accused a "pro-government mob" of carrying out the attack that killed Suthin Tharathin -- the tenth victim of political violence in nearly three months of street rallies.

Police later said he died when a group of pro-government "Red Shirts" activists from a neighbouring province clashed with protesters.

Each side in the bitterly divided kingdom routinely blames the other for the violence, but the incident will renew fears of wider clashes despite the imposition of a state of emergency across Bangkok.

"Forty-five polling stations had to be closed out of 50 in Bangkok," said Surapong Tovichakchaikul, deputy prime minister and one of the main figures at the Centre for Maintaining Peace and Order, which is handling the crisis.

Away from the capital voting went ahead in 66 of the country's 76 provinces, including the ruling party's heartlands in the north and northeast, he said.

Yingluck, who has so far refused to resign or delay the poll, is set to meet election officials on Tuesday after the Constitutional Court ruled that the general election could legally be delayed because of the crisis.

While the protest augurs badly for next weekend's election, Yingluck is likely to press on with it regardless, according to Pavin Chachavalpongpun, associate professor at the Centre for Southeast Asian Studies at Japan's Kyoto University.

"I don't think it will increase pressure on her to postpone it... She wants to boost her government's legitimacy with a quick election," Pavin added.

The demonstrators, who have staged a near two-week "shutdown" of Bangkok to try to derail the vote, have rejected the election.

They had insisted they would not obstruct advance voters, although analysts have questioned whether the disruption was tantamount to intimidation of the electorate.

They say another poll victory for the ruling party will further embed the Shinawatra clan in Thai politics.

"I came to protect my rights," said 75-year-old Vipa Yoteepitak.

"We can't let this happen. If we don't fight today (to vote), we will keep losing our rights."

The United States said it was "deeply troubled" by efforts to block voting.

"While we do not take sides in the political dispute and strongly support freedom of expression and the right to peaceful protest, preventing citizens from voting violates their universal rights and is inconsistent with democratic values," State Department spokeswoman Jen Psaki said in a statement.

Thais have been left divided by years of political turmoil that began shortly before Thaksin was deposed in a 2006 military coup.

The crisis roughly pits Thaksin's supporters from rural and urbanised communities in the north and northeast against his foes within the country's elite, the Bangkok middle classes and parts of the south.

The billionaire tycoon-turned-politician -- who lives abroad to avoid a jail term for corruption that he says was politically motivated -- has won every election since 2001 either directly or more recently through allied parties.

But his opponents accuse him of corruption, "vote buying" and pushing through expensive populist policies to strengthen his electoral position.