US under fire in global press freedom report
World

US under fire in global press freedom report

Conflicts continued to weigh heavily on the media last year but press freedom was also under increasing threat from abuses by democracies like the United States, Reporters Without Borders said Wednesday. 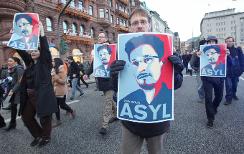 Protestors hold up placards featuring a picture of former NSA contractor Edward Snowden and with the world Asylum on it during a march against the spying methods of the US in Hamburg, northern Germany on December 28, 2013

In its annual World Press Freedom Index, the Paris-based media rights watchdog warned of the "growing threat worldwide" from the "tendency to interpret national security needs in an overly broad and abusive manner".

The United States was singled out for its pursuit of intelligence leaker Edward Snowden, the conviction of WikiLeaks informer Bradley Manning and the secret seizure of phone records from the Associated Press.

The group, known by its French acronym RSF, said the United States had suffered "one of the most significant declines" in press freedom last year, dropping 13 places to 46th in the 180-country index, wedged between Romania and Haiti.

"Countries that pride themselves on being democracies and respecting the rule of law have not set an example, far from it," RSF said.

Syria's overall ranking of fourth from the bottom was unchanged, but RSF has raised concerns about a surge in kidnappings.

The top-ranked countries were Finland, The Netherlands and Norway, unchanged from last year.

At the bottom again were Eritrea, North Korea and Turkmenistan, described by RSF as "news and information black holes and living hells for the journalists who inhabit them".

Britain dropped three places in the ranking to 33rd, with RSF blaming the "disgraceful pressure" it put on newspaper The Guardian over its reporting of Snowden's revelations of widespread spying by the US National Security Agency.

In Asia, Japan dropped five spots to 59th, with RSF criticising the adoption late last year of a new "intelligence protection" law that stiffens penalties for those who spill state secrets.

China, which dropped one spot to 175th, "continues to censor and jail dissident bloggers and journalists", RSF said.

Bulgaria remained the lowest-ranked European Union country in the index, but was "closely challenged" by Greece, which is ranked 99th after years of financial pressure on the media and some violence against journalists.

The report also highlighted "noteworthy rises" in countries where "violence against journalists, direct censorship and misuse of judicial proceedings are on the decline" -- including in Panama, Ecuador, Bolivia and the Dominican Republic.

Here are some selected rankings from the index: