A canal across Nicaragua: is this for real?
World

A canal across Nicaragua: is this for real?

It would be an engineering feat of gargantuan proportions -- a $40 billion Chinese-built canal across Nicaragua to boost the flow of ships between the Caribbean and the Pacific. 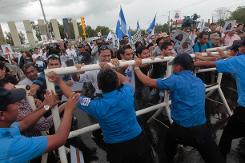 Nicaraguans protest in front the National Parliament against the Inter-Oceanic canal in Managua, on June 13, 2013

Proponents point to jobs galore, a huge rise in GDP and other juicy benefits in a very poor country. But as feasibility studies and other preparations gather pace, Nicaraguans are divided between optimists and those who dismiss the plan as a pipe dream.

And environmentalists say it is a recipe for disaster.

President Daniel Ortega and Wang Jing, chairman of HKND, the Chinese company hired last year to build and operate the waterway for a century, have said work will get under way towards the end of 2014.

That would be just around the time the Panama Canal -- where expansion work has stalled in recent weeks in a dispute over cost overruns -- turns 100 years old.

For now, much of it is hush-hush. Feasibility studies are being carried out. Local and international experts are flying over Nicaragua to study possible routes for a canal, and on the ground they are measuring topography and doing biodiversity tests.

Proponents say that as an engineering task it would dwarf the Panama Canal and work more to complement it than as a rival route to move goods across the world.

Indeed, the official numbers estimate GDP growth of up to nearly 11 percent per year and the creation of almost one million jobs during the construction and initial years of operation.

That has folks drooling in a nation of six million people with a 45 percent poverty rate and a jobless and underemployment rate of 53 percent.

Earlier this month, the National Council of Universities said it was opening up study programs in 50 higher education facilities to prepare skilled labor for the mega-endeavor.

Kamilo Lara, who represents civil society groups on the commission preparing the canal, said the benefits are not just for Nicaraguans but also would also speed up global trade.

But skepticism about the project also goes beyond borders.

Ralph Leszczynski, the London-based head of research at the maritime agency Banchero Costa, said flat out "there is no justification whatsoever for a new canal through Nicaragua."

"We already have a canal through Panama that works pretty well" and is being expanded to handle larger freighters," he said.

Leszczynski said a relatively small part of world trade needs to pass through the Panama Canal, so another one through Nicaragua would be a pointless duplication.

The Managua government says the new canal would require construction of deep water ports, an airport, an oil pipeline, a railroad, and that building it would take between six and 10 years.

Six possible routes are being considered. The one considered most likely to get the nod by specialists would stretch over a distance of 286 kilometers (177 miles) between the Pacific and the Caribbean, passing through Lake Nicaragua, which covers 8,600 square kilometers (3,320 square miles) and is the country's main source of drinking water.

By comparison the length of the Panama Canal is about 77 kilometers (48 miles).

"Even a small fuel leak or an earthquake could generate an ecological disaster that would end the lake's drinking water potential forever," said biologist Salvador Montenegro, head of water resources research at the National Autonomous University of Nicaragua.

What is more, "everything is being done quickly and in silence. There is a shroud" surrounding the project, said Ana Quiros, director of the Autonomous Women's Movement, one of the country's most active social organizations.

She also expressed doubt about Wang.

"He lacks credentials to make you think he is an experienced businessman and powerful builder," she said.

Quiros complained, for instance, that Wang won a concession to start up a telephone company in Nicaragua but she said she is unaware of any progress having been made on that front.