An International Monetary Fund team arrived in Ukraine on Monday to discuss conditions for a Europe and US-backed rescue loan, as tensions mounted over Russia's military incursion into Crimea. 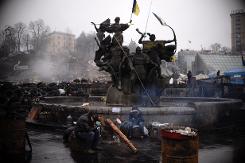 Men rest near a barricade on Independence square in central Kiev on March 3, 2014

The IMF said its team would conduct a ten-day "fact-finding mission" and discuss the reforms necessary to open the way for what could be a multi-billion-dollar loan package for Kiev.

Officials of the new Ukraine government have said they need at least $15 billion, which could include contributions from Europe, to stabilize and restructure their finances, left in shambles by the ousted government of Viktor Yanukovych.

But the Fund and other donors have stressed the need for tough prior reforms, including slashing heavy subsidies for natural gas, to agree to assist the country.

Lew said Washington will work with other countries and institutions "to provide as much support as Ukraine needs to restore financial stability and return to economic growth, if the new Ukrainian government implements the necessary reforms," according to a Treasury official.

He and Aso agreed that the IMF should be at the center of any aid package, the official said.

But the issue of aid remained in the background of outrage expressed by seven members of the G8 powers -- Russia is the eighth -- over the mobilization of Russian troops in the strategic Crimean peninsula.

The European Union warned on Monday that EU-Russia ties were at risk if Moscow failed to de-escalate tensions in Ukraine.

And markets sank around the world amid worries that the crisis would escalate further.

IMF Managing Director Christine Lagarde stressed that the issue of financial support was apart from the politics of the region.

The IMF wants to deal with Kiev's problems "from a purely economic and financial point of view -- not from a geo-political point of view, which is another matter," she said in Bilbao, according to CNBC.

The mission will enable the lender to advise the government on a financial aid program "that will include indeed conditions that will have to be undertaken by Ukraine" in order to rebuild its economy.

- We have no choice: Yatsenyuk -

The issue of conditions for reform continued to feature in any mentions of IMF-led support financing for Kiev.

The IMF has repeatedly stressed in recent years the need to cut fuel subsidies which constitute a large part of the government's fiscal deficit, put at a high 9 percent of GDP by independent economists.

Also at issue is the widespread official corruption that has bled government finances.

On Monday, Ukraine's new prime minister, Arseniy Yatsenyuk, said the country was ready to accept the demands of the IMF, including rasing tariffs and cutting social spending.

"This government will fulfill all the requirements of the IMF for the simple reason that it is our only option," he said at a business association in Kiev, according to the Interfax-Ukraine news agency.

Last week Yatsenyuk said he inherited a government with less than $500,000 in cash at hand and foreign exchange reserves at a low $15 billion.

The government has said it needs "at least $15 billion" in outside aid to support itself and implement reforms this year.

A team of European experts was also already in Kiev on Monday to assess the situation, with any aid though still tied to the IMF's conclusions.

"There are some difficulties in that country to which we have to respond through emergency measures in the economic field," said European Commission President Jose Barroso said

The EC remains willing as well to offer political association with the European Union, including economic integration and a free trade deal, he said.