Human rights groups have questioned the wisdom of Shakespeare's Globe Theatre in London taking a production of Hamlet to North Korea, but stopped short of calling for the plan to be scrapped. 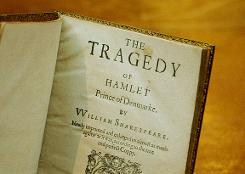 Human rights groups have questioned the wisdom of Shakespeare's Globe Theatre in London taking a production of Hamlet to North Korea, but stopped short of calling for the plan to be scrapped

The Globe will perform the play in the secretive state in September 2015 as part of a global tour marking the 450th anniversary of the English playwright's birth.

"We do not believe that anyone should be excluded from the chance to experience this play," the theatre said in a statement.

But Phil Robertson, the deputy director of Human Rights Watch's Asia division, said exclusion would be the order of the day if the performance went ahead in Pyongyang.

"It's going to be an extremely limited, elite audience that would see a production in any case," Robertson told AFP on Tuesday.

"It would have to be in Pyongyang, which is a showcase city whose residents are selected to live there because they have shown their loyalty," Robertson said.

"So there's a strict pre-selection process involved right from the off."

Although North Korea is the subject of numerous UN and other international sanctions, there is no cultural boycott or other provision that a performance like that planned by the Globe would violate.

Human rights group Amnesty International urged the theatre to "read up" on the reality of North Korea before going there.

"No tragic play could come close to the misery that the 100,000 people trapped in the country's prison camps endure –- where torture, rape, starvation and execution are everyday occurrences," Amnesty said in a statement.

The dates for a performance in North Korea have not been set, and it was not clear how far the Globe's negotiations with Pyongyang had progressed.

"When the North Korean leadership gets around to reading the plot of Hamlet, one imagines they might well insist on something else from the canon," suggested Robertson.

The play revolves around family feuds and Hamlet's eventual killing of his uncle, echoing recent events in North Korea where leader Kim Jong-Un's regime ordered the execution of his uncle Jang Song-Thaek in December last year.

Jang, once the country's unofficial number two and Kim's political mentor, was put to death on December 12 on an array of charges including corruption and plotting to overthrow the state.