Russia may accuse the protesters who toppled Ukraine's pro-Moscow government of being "fascists" and "neo-Nazis" but the country's Jews insist they have seen no trace of anti-Semitism. 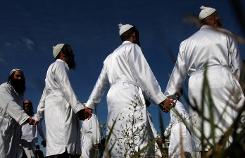 Ultra orthodox Jews offer prayers in the small Ukrainian city of Uman, some 200 kms south of Kiev on September 9, 2010

Moscow was quick to slam the Maidan protesters as extremists bent on waging war against ethnic Russians, and media in Russia -- much of it influenced by the Kremlin -- has carried repeated reports of Russians fleeing Ukraine, claiming both they and Jews are at risk of violence.

But according to Ukraine's chief rabbi Moshe Reuven Asman, there isn't a hint of anti-Jewish sentiment -- either on the Maidan square, where protesters have camped out for four months, or elsewhere in the country.

Just to be sure, he and Vadim Rabinovich, the president of the Congress of Ukrainian Jews, phoned around to get local confirmation.

"We called community leaders and rabbis across the country and noone mentioned any expression of anti-Semitism," said Asman.

"There's a difference between nationalism and Nazism," he also pointed out, as Moscow has repeatedly blended the two.

The president of the Council of Ukrainian Jews, Ilya Levitas, and Berl Kapulkin, spokesman for the Jewish community in the largely Russian-speaking port of Odessa, came to the same conclusion.

On the one occasion when a petrol bomb was thrown at a synagogue in the southwestern town of Zaporizhia in February, leaders of the Maidan movement were quick to offer the local Jewish community their support and protection, Kapulkin said.

A swastika was recently daubed on the walls of the synagogue in Crimea's capital Simferopol, but "we don't know who did that -- the pro- or the anti-Russians," he added, insisting there was no anti-Jewish violence in the peninsula.

The history of Jews in Ukraine has been a bloody one with pogroms in the 19th and early 20th century. About one million were killed during the occupation by Nazi Germany, including by Ukrainian nationalist collaborators.

In the most notorious massacre, close to 34,000 Jews were killed in just two days at Babi Yar in western Kiev in September 1941.

But with the fall of the Soviet Union, some 250,000 Jews left the country for Israel and anti-Semitism has seen a gradual decline.

Evgueni Kvatchov, 22, a recent university graduate, dismissed any concerns about his religion.

"I have never noticed any case of anti-Semitism, never. But of course, it could have been different if I walked around with curls (as worn by orthodox Jews)," he told AFP in Kiev.

A few years ago, the leader of the nationalist party Svoboda in Ukraine's interim government, Oleg Tyagnybok, was slammed by the Simon Wiesenthal Centre for anti-Semitic slurs. Now even he refrains from such comments.

Faced with an escalating stand-off between Moscow and Kiev over Ukraine's separatist Crimean peninsula, which is widely expected to vote in favour of joining Russia in a referendum on Sunday, Jewish groups say their overriding priority is to avoid violence.

"We want there to be negotiations. We want the politicians to talk. We are praying for peace," said Asman.

Fed up with Moscow's allegations, leaders of Ukraine's Jewish community -- the third largest in Europe at around 300,000 -- sent a blunt petition to Russian President Vladimir Putin last week.

"Russian-speakers in Ukraine are not the subject of victimisation and harassment and their rights are not being curtailed," it said, accusing the Kremlin of deliberately fomenting fear.

"We believe that talk of 'fascists', a rise in 'followers of Bandera' (a nationalist who collaborated with the Nazis during World War II) and the return of Jewish pogroms is intended to frighten people," said the signatories, who included businessmen and artists as well as the president of the federation of Jewish organisations in Ukraine, Iosif Zisels.

"The claim... that there is rising anti-Semitism in Ukraine does not in any way correspond with reality."

While Kiev kept a close eye on nationalists in Ukraine, "the same cannot be said of neo-fascists in Russia who are given official encouragement," the petition concluded, calling on Putin to "stop interfering in Ukraine and encouraging pro-Russian separatism".