The elegant brunette gazes out from a black and white photograph, her shoulder-length hair tumbling onto a floral print dress. 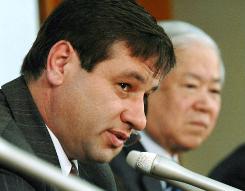 Romanian Gabriel Bumbea poses with a portrait of his sister Doina on the sideline of a session of the UN Human Rights Council on North Korea on March 17, 2014 in Geneva

The ageing picture is a heartrending trace of Doina Bumbea, a 28-year-old Romanian who was ensnared by North Korea's regime in 1978 and who never saw her family again.

It is a chilling reminder of the global reach of North Korea's programme of abducting foreign women allegedly to breed a pool of spies for the secretive Stalinist state.

"More than words, I want the facts," her brother Gabriel Bumbea, 47, said Monday as the UN Human Rights Council threw the spotlight on shocking violations by Pyongyang.

"My father died many years ago, in 1989. My mother is almost dead right now. My brother died nearly three months ago. So I'm the only one who has the will to fight, all alone," he told AFP.

A UN-mandate commission of inquiry estimates that 200,000 people from other countries have over the decades been abducted by the secretive Stalinist state or disappeared after going there willingly.

"These international enforced disappearances are unique in their intensity, scale and nature," the commission said in a no-holds-barred report released last month.

The overwhelming majority of the victims were South Koreans denied the right to return home after the 1950-1953 Korean War, or ethnic Koreans lured from Japan after 1959.

The regime's agents also grabbed Japanese -- around 100, according to the commission -- pressganging them as accent and culture teachers for its spies.

The fate of the Japanese has been a constant thorn in relations between Tokyo and Pyongyang, which has acknowledged 13 cases but has never disavowed the abductions.

Yet the story of Bumbea and kidnap victims of other nationalities was little known until Charles Jenkins, a 1965 US Army deserter who ended up stuck in North Korea, was allowed to leave with his Japanese abductee wife and their adult children in 2002.

Jenkins exposed a "spouse-sourcing" programme for at least four US deserters, in what the UN commission said was an attempt to avoid the birth of mixed-race Koreans, anathema to the regime.

Couples were also said to be forcibly paired in order to breed a pool of potential non-Korean agents.

Allegedly launched in 1977, according to testimony from Jenkins and others who managed to get out of North Korea, the programme is believed to have involved more than two dozen women.

All told, citizens of 12 countries and territories are thought to have been swept up, including Japan, Thailand, Malaysia, Singapore, Macao, as well as Lebanon, Jordan, Romania, France, Italy and The Netherlands.

In a bitter twist of fate, Doina Bumbea had already managed to get out of one tightly-controlled communist country, her homeland Romania.

She married an Italian in 1970, and they left for Rome, before divorcing in 1972, her brother said.

Living alone, she studied fine art and became a painter. She met an Italian who claimed to be an art dealer and who proposed a job as a gallery curator in Tokyo, provided she put on an exhibit in Pyongyang first.

"In 1978, there was no Internet like there is today, and she was very relaxed, an artist, so she was easy to fool," Bumbea said.

Thanks to information from Jenkins it emerged that she was "given" to another US Army deserter James Joseph Dresnock, who fathered her two boys.

"In 1997, my sister got sick with lung cancer and died. But I have two nephews there, the oldest is Ricardo Dresnock, and the youngest is James Gabriel Dresnock. She named him after me. They are 33 and 31," said Bumbea.

"I've never had any contact with them. It's impossible," he said.

Given North Korea's record of throwing generations of the same family into its prison camps on guilt-by-association grounds, Bumbea said he fears for his nephews because he speaks regularly at abductee family events in Asia.

He has managed to see James Gabriel's face, at least, thanks to a 2006 BBC documentary about defectors, "Cross the Line".

"The other abductees' families have nothing. I have a little. It's something," he said emotionally.