The French intelligence agency in charge of military and electronic spying is massively collecting data and monitoring networks of telecoms giant Orange, Le Monde newspaper reported in its Friday edition. 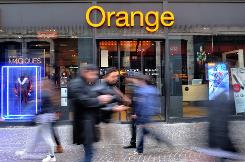 A picture taken on February 24, 2014 in the French northern city of Lille, shows people walking in front of an Orange store

"The DGSE can read, like an open book, the origin and destination of all communications of Orange customers," the paper said.

Monitoring operations were being carried out without any external supervision with access "free and total" for spies at the General Directorate for External Security (DGSE).

Le Monde said its report was based on an internal British intelligence document made available by former US intelligence contractor Edward Snowden.

Contacted by AFP, an Orange spokesman said the company "like all (other) operators has relations with state agencies in charge of the country's and the French people's security."

"These relations strictly comply with the laws and are legal under the responsibility of the State and the control of judges," he added.

The DGSE and agents with military clearance have been working with Orange, formerly known as France Telecom, "for at least 30 years", said Le Monde.

Snowden, who has been charged in the United States with espionage, lives in exile in Russia.

He said earlier this month he had no regrets over his leaks about mass surveillance programmes by the US National Security Agency (NSA), saying they sparked a needed public debate on spying and data collection.