Where the Indian Ocean rolls toward Myanmar's southwestern coast, a lacework of 800 islands rises, fringed with shimmering beaches of no footprints. 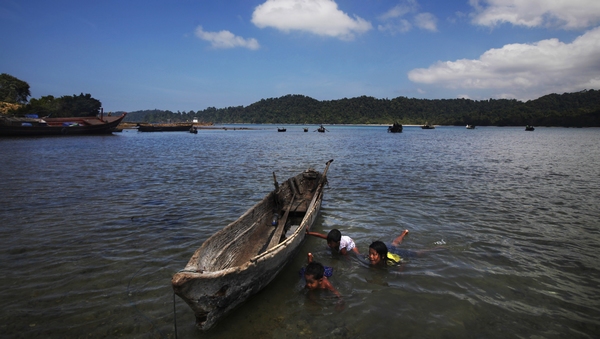 Children learn to swim on Bocho Island, inhabited by Moken and Burmese fishermen in the Mergui Archipelago. (AP Photo)

Here hornbills break a primaeval silence as they flutter through soaring jungle canopy. Pythons slumber on the gnarled roots of eerie mangrove forests. Only rarely will you spot the people who live here: the Moken, shy, peaceful nomads of the sea.

The Mergui archipelago has been called the "Lost World", but outsiders have found it -- first fishermen, poachers and loggers, and now developers and high-end tourists. The people losing this world are the Moken, who have lived off the land and the sea for centuries.

A Moken woman cooks food in the shade of a tree on Island 115 in the Mergui Archipelago. (AP Photo)

The islands are thought to harbour some of the world's most important marine biodiversity, and are a lodestone for those eager to experience one of Asia's last tourism frontiers before, as many fear, it succumbs to the ravages that have befallen many once-pristine seascapes.

As the world closes in, the long-exploited Moken are rapidly diminishing in numbers and losing the occupations that sustained them for generations. Though they are known as "sea gypsies", very few still live the nomadic life, and only some aging men can fashion the kabang, houseboats on which the Moken once spent much of every year.

Their island settlements are awash with trash and empty liquor bottles, signs of the alcoholism that has consumed many Moken lives. They eventually may share the same fate as some of their cousins in neighboring Thailand who have become exotic photo opportunities near highly developed tourist areas.

"Before it was easy to earn money, to find products of the sea. You could easily fill a bucket with fish. But now many Burmese are pursuing the same livelihoods," said Aung San, resting under the trees of Island 115 with some 20 Moken men, women and children. 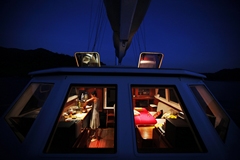 A Thai tourist works in the kitchen of the Meta IV, a $1-million yacht anchored near Jar Lann Island in the Mergui Archipelago. (AP Photo)

"The life of the Moken is becoming harder and harder. So many Moken men are dying."

Asked if his people would welcome foreign visitors, the fisherman and trader replied, "We don't want to live with the Burmese or other people. We want to live by ourselves."

The former military rulers of long-isolated Myanmar kept the archipelago off-limits to foreign visitors until 1996. A nominally civilian government took over in 2011, but tourism remains relatively low. Some 2,000 tourists visited last year, or about 2.5 per island.

To date only one hotel exists, the Myanmar Andaman Resort, tucked under forest cover deep within a U-shaped bay on McLeod Island. But a grab-the-best-island race is being run among Burmese and foreign developers, with a dozen concessions already granted and others under negotiation.

The reefs and islands here range from rocky outcrops to extensive land masses of high hills pierced by caves and blanketed by luxuriant vegetation.

A long jetty and two helicopter pads have been built and nine bungalows are under construction on the stunning but rather unwelcomely named Chin Kite Kyunn (Mosquito Bite Island). It is leased by Tay Za, believed to be Myanmar's richest tycoon and closely connected with its power brokers. 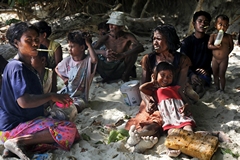 A group of Moken families rests in the shade of trees on Island 115 in the Mergui Archipelago. (AP Photo)

Three security men and 11 lazy dogs are currently the island's only inhabitants.

The website of one development company, Singapore's Zochwell Group, advertises the island it hopes to develop as "The Next Phuket". Zochwell is negotiating a lease to build a marina, casino, hotels and a golf course to be designed by the company of golfing legend Jack Nicklaus.

"There was no infrastructure, no towns, no streets, nothing . a maritime Shangri-La. Nobody in our group had seen anything like it. We were absolutely enchanted," said Christoph Schwanitz, the editor of a China business magazine who came a year ago and now is part owner of Meta IV, a $1-million yacht offering cruises.

Last September, a super-yacht carried a Russian couple to a "unique Robinson Crusoe setting" together with harps, xylophones and chanting Buddhist monks imported for a deserted-island wedding.

Myanmar's minister of hotels and tourism, Htay Aung, said the islands will be promoted, but that protecting the environment and "minimising unethical practices" are top priorities. 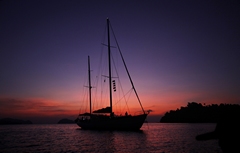 For the time being, however, the region remains a free-for-all, with no overall management plan for tourism or the environment.

Nor is there a known blueprint for the precarious future of the Moken, whom French anthropologist Jacques Ivanoff describes as "the soul of the archipelago".

For centuries they roamed the islands, worshipping spirits and reciting long epics of a mythical past. They collected mollusks, crabs and sea cucumbers, speared fish, hunted and dove deep to find valuable pearl oysters.

Today, most have been moved into settlements by the government or driven to find work on the mainland, where they are sometimes forced to labor on mines and farms. Their hand-hewn kabangs, built as symbolic representations of humans, complete with mouth, anus and other organs, are becoming museum pieces.

About 2,000 Moken are believed to inhabit the archipelago, significantly reduced through migration, intermarriage with Burmese and deaths of males from rampant alcohol and drug abuse.

"In 20, 30 years the Burmese will dominate Moken culture. Only a little of it may remain," said Khin Maung Htwe, a Burmese married to a Moken, in Ma Kyone Galet village. The village, located within Lampi National Park on the islands, is home to 480 Burmese and other ethnic groups, 280 Moken and 146 from Moken-Burmese marriages, as of a 2012 count.

From a distance, the village is a tropical idyll. But its streets and beaches are piled high with trash by villagers who in the past simply discarded their natural refuse. A dip below the surface off nearby beaches reveals a world of dead coral and very few fish.

Though tourism is just getting started here, industry has already taken a heavy toll, including dynamite fishing, illegal logging and wildlife poaching. On army-controlled Jar Lann Island, reporters easily located an illegal logging camp not far from a military outpost.

Trawlers have depleted the shallow fishing grounds of the Moken, who cannot compete with better equipped Burmese divers in search of sea cucumbers and oysters. Instead, they catch small squid, often hooked by cheap plastic bait, while Thai and Burmese fishermen use powerful kerosene lamps to attract larger squid species in vast quantities.

Julia Tedesco, who manages an environmental and tourism project at Lampi, said tourism is developing "just as so many resources have already been depleted".

Tedesco's three-year project, run by the Italian group Instituto Oikos, includes the development of eco-tourism, putting a draft management plan into practice and training park staff. A key challenge, she says, is to protect the environment while providing income to local people who have long drawn their sustenance from it.

What happens to them will depend greatly on Myanmar's powerful politicians and generals, and their business cronies. Pervasive corruption breeds doubt that the islands will be managed sustainably.

Adrian Zdrada, marketing manager for the Myanmar Andaman Resort, said the government could create "sustained tourism, like on the Galapagos. ... But it's a dream that will never happen. They will just sell and lease as many islands as they can. It will be a Thailand scenario. It will be another Phuket."

Phuket and other Thai islands adjoining the Mergui archipelago to the south were once similar to the Lost World. Today, Phuket's beaches are packed with tourists, luxury high-rise hotels and jerry-built beer bars draped with prostitutes. Backpackers are ferried to even the most remote islands. And the Moken who also inhabit that region cling to the fringes of society, no longer tied to the sea.

The answer in Myanmar may be eco-tourism, but even that is problematic, at least for the Moken.

Khin Maung Htwe, who has worked with the anthropologist Ivanoff, said re-orienting the largely illiterate Moken from their deeply rooted lifestyles and occupations to being nature guides or hotel staff would prove difficult.

On Island 115, several Moken families recently hunted for squid and whatever else they could collect before returning to their village on another island. The children, none of whom attend school, romped on the beach or expertly paddled out in dugout canoes. At night, all slept on the white sand or just inside the tree line hugging the beach.

"We just want to do what we are doing. We don't have the knowledge or motivation to do any other work," Aung San said. "We live here. We don't want to go anywhere else."