Defending champions West Indies and Australia face off in a do-or-die clash in Dhaka on Friday as action resumes in group two of the World Twenty20 Super-10s after a two-day break. 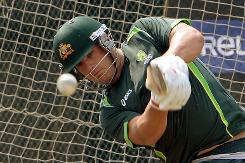 Australia's Aaron Finch during a training session at the Sher-e-Bangla National Cricket Stadium in Dhaka on March 27, 2014

India lead what is billed as the "group of death" with two consecutive wins, while Australia, the West Indies, Pakistan and hosts Bangladesh have lost a game each.

Three wins in four games will not guarantee a team one of the two semi-final places from the group, but two defeats will almost certainly hasten an early exit.

George Bailey's Australians, seeking a maiden World T20 title after winning the 50-over World Cups four times, were beaten by Pakistan in their only match so far in the tournament.

The West Indies, who lost to India, bounced back to thrash Bangladesh by 73 runs on Tuesday, which gave the champions the best net run-rate in the group of 1.75.

Australia have three matches in hand and the West Indies two, but neither side can afford to lose the opening game of Friday's double-header at the Sher-e-Bangla stadium.

Australian wicket-keeper Brad Haddin said the knock-out situation was a blessing in disguise.

"Sometimes that can relieve the pressure because you know where you stand," Haddin said. "There will be no second chance for us. We have got to make sure that we bring our A game and deliver under pressure.

"We have done that well over the last four months and I see no reason why we can't do it again."

West Indies captain Darren Sammy admitted it would be a tough match against the Australians.

"Australia are a good side, so we know it won't be an easy game," Sammy said. "But then it is just another cricket match -- a contest between bat and ball.

Australia may leave out 43-year-old spinner Brad Hogg, the oldest player ever in the World Twenty20 competitions, who had an forgettable outing against Pakistan.

Hogg dropped Umar Akmal, top-scorer with 94 off 54 balls, when he was on 22 and then conceded 29 runs in three wicketless overs after being called on to bowl in the ninth over.

Hogg could be replaced by 20-year-old spinner James Muirhead, while all-rounder James Faulkner was set to play after recovering from a knee injury.

The West Indies' batting still looks unsettled despite Dwayne Smith's 72 off 43 balls and a run-a-ball 48 by the unusually dour Chris Gayle, both against Bangladesh.

But the bowling has come good with spinners Samuel Badree and Sunil Narine striking rich form along with unheralded left-arm seamer Krishmar Santokie.

"We need to play to our full potential with everyone chipping in," Sammy said. "I don't think we have played to our potential yet."

Mahendra Singh Dhoni's Indians will take on the hosts in the second match of the evening, looking to build on the two identical seven-wicket wins over Pakistan and the West Indies.

Restaurant, food and tourism-related businesses are slowly recovering thanks to the country's reopening to international tourists and increased arrivals, reflected in the latest new business registration figures released by the Commerce Ministry.

Fares on the MRT Blue Line will remain unchanged, at least until the end of this year, after the cabinet approved a hike on Tuesday, according to the Transport Ministry.