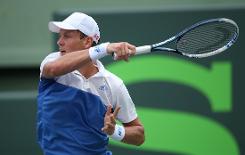 Rafael Nadal of Spain, seen in action against Milos Raonic of Canada during their quarter-final match during day 11, at the Sony Open, at Crandon Park Tennis Cente in Key Biscayne, Florida, on March 27, 2014

Spain's Nadal, who has lost three times in the Miami final, clinched the victory on the first match point in the third set when Raonic failed to reach a spinning serve out wide on hardcourts at the Crandon Park Tennis Center.

"Today was a special opponent with an unbelievable serve and with a strong game from the baseline. Normally I have to be better than him, so I tried to use that strategy," Nadal said.

Top seed Nadal advances to the semis, where he will face seventh seeded Tomas Berdych, who cooled off the red-hot Ukrainian Alexandr Dolgopolov in straight sets, 6-4, 7-6 (7/3), earlier in the day.

Raonic kept Nadal on his heels with his strong serving in the first set. But Nadal recovered quickly in the second to get a service break.

Nadal was on his toes and moving quicker side to side as he took advantage of Raonic's slower second serve to win the final two sets to close out the two and a half hour match.

He tallied just two aces but won 47 of 63 points on his first serve.

"I was lucky at the beginning of the second set because I started with a break and that was very important for me," Nadal said. "I felt that I finished the match playing better.

"I think I started the match playing okay, but not playing well on the break points."

"He just had the right approach after that first set," Roanic said. "We were both struggling quite a bit. He let go a little bit more.

"He's been in that situation much more than I have. He dealt with it from a mental and strategical side better than I did."

Nadal has reached the quarter-finals or better in his last six appearances in Miami but he has failed to win the title. He lost three times in the final in 2011, 2008 and 2005.

Seventh-seeded Czech Berdych secured his semi-final berth by blasting 11 aces. He had one more service break than Dolgopolov during the one hour, 45 minute match played in windy conditions.

"I handled it quite well," Berdych said. "I didn't start both sets very well. I was not really up in the both sets. I was break down since the beginning of the first set. Then a break down in the second set, so it didn't look that well.

"But I managed, especially at the end of the second set. I held pretty well and that's what I'm very pleased with."

The Czech already has one title to his credit in 2014, at Rotterdam, and a runner-up finish in Dubai where he fell to Swiss great Roger Federer in the final.

Berdych is seeking a second trip to the final at Miami, where he lost to Andy Roddick in the title match in 2010. He is also a former Wimbledon finalist.

"I'm very pleased with that. There's no question about it," he said. "It's really nice feeling to keep winning and keep playing well, and I will try to continue with this."

Dolgopolov was aiming to reach a fourth straight semi-final, having made it to the Rio de Janeiro final last month, followed by semi-final appearances in Acapulco, Mexico and Indian Wells, California.

Dolgopolov said he felt out-of-sorts on the court against Berdych.

"I'm obviously not happy to lose," Dolgopolov said. "I played good and bad and all around the place."