ECB to hold fire on rates despite slow inflation
World

ECB to hold fire on rates despite slow inflation

The European Central Bank is not expected to cut its key interest rates this week, even though inflation in the euro area continues to slow, analysts said. 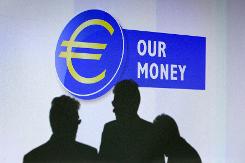 The European Central Bank is not expected to cut its key interest rates this week, even though inflation in the euro area continues to slow, analysts said

The ECB has held eurozone borrowing costs at their current all-time lows since November.

But no further monetary easing appears to be on the cards at the bank's next meeting on Thursday just yet, given recent data suggesting the region's economy is in a tentative recovery, central bank watchers said.

At the moment, deflation is perceived to be the biggest threat to that recovery.

Last month, area-wide consumer prices edged up by just 0.8 percent, way below the ECB's target of just below 2.0 percent, with some observers warning of a destructive spiral of deflation.

Deflation is a general decline in prices and can be highly damaging if consumers, expecting prices to fall further, hold off purchases.

March inflation data for the entire eurozone are not scheduled to be released until Monday.

But data on Friday showed that inflation in Germany, the region's biggest economy, slowed to just 1.0 percent this month, the lowest level in nearly four years.

ECB officials have repeatedly said they see no threat of deflation, but president Mario Draghi reiterated last week that the central bank stood ready to act if necessary.

- Many measures on hand -

"If any downside risks to (our inflation) scenario appear, we stand ready to take additional monetary policy measures that ensure our mandate is fulfilled," Draghi told a conference in Paris.

"In other words, we will do what is needed to maintain price stability," Draghi insisted.

Elsewhere, Slovak central bank chief and ECB governing council member Josef Makuch also said the bank was "ready to adopt non-standard measures to prevent slipping into a deflationary environment. The ECB has many measures on hand."

In addition to cutting its interest rates, the ECB could ease monetary conditions by pumping money into the system or buy up government bonds to bring down borrowing costs.

Nevertheless, analysts believe the ECB's hand will not be forced just yet.

ING DiBa economist Carsten Brzeski acknowledged that the drop in German inflation was a headache for the ECB.

But he suggested the trough in German headline inflation might now have been reached this year.

Key will be the new inflation data for the eurozone as a whole, he said.

"We don't think that the ECB will react to a single data release but Monday's eurozone inflation data could tip the balance in a governing council which does not seem to have made up its mind yet," Brzeski said.

"At the current juncture, we still think that the ECB's preferred next policy option is to do nothing. The most likely outcome of next week's ECB meeting is that the ECB will continue talking the talk in order not to have to walk the walk," Brzeski said.

- Outside chance of action -

"We expect policy settings to remain unchanged, as the (anticipated) slowdown in March inflation is likely to be largely driven by temporary factors," he said.

Nevertheless, Capital Economics economist Jonathan Loynes there could be an outside chance of concrete action as early as this week.

"Developments over the last month have not clearly met either of the ECB's two 'contingencies' for further policy action," he said.

"Nonetheless, the ongoing danger of deflation and dovish signals from several governing council members –- not least Bundesbank President Jens Weidmann –- suggest that further stimulus is still in prospect. And given the ECB's recent apparent predilection for surprise, an April move cannot be entirely ruled out," Loynes said.

For UniCredit economist Marco Valli, the most important issue for ECB chief Draghi on Thursday would be "if and how it will decide to become more vocal about the currency."

A strong euro adds to the deflationary pressures.

But Valli suggested Draghi could take a softer approach here, "dealing with the exchange rate only in the question and answer session and stressing that the ECB stands ready to act if currency appreciation were to endanger price stability."