South Korean President Park Geun-Hye's claim that re-unification with North Korea could trigger an economic "bonanza" has been greeted with widespread scepticism -- though not necessarily within the legal profession. 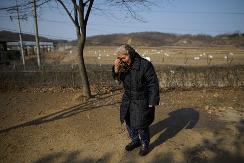 A woman weeps for relatives in North Korea as she visits the Demilitarized Zone (DMZ) at Imjingak, Paju, in South Korea's Gyeonggi Province on January 31, 2014

A recent series of landmark rulings in South Korean courts suggest a merger of North and South could unleash a wave of complex inheritance claims that would keep lawyers busy for years.

The latest case saw a Seoul court last month uphold the inheritance rights of a North Korean defector who escaped to the South in 2009.

The circumstances of the case were complex, involving three generations and the defector's South Korean-born father - surnamed Lee -- who was captured by the North during the 1950-53 Korean War.

Lee's relatives in the South reported him missing and he was officially pronounced dead in 1977, allowing his share of the family inheritance to be distributed among his South Korean siblings.

Lee surfaced again in 2004 and actually met up with family members in China. He died in North Korea several years later, after which his daughter managed to escape to the South.

The importance of the ruling that upheld the daughter's subsequent claim to Lee's inheritance was its decision to waive the 10-year statute of limitations on such cases.

Presiding Judge Seo Young-Hyo ruled that the division of the Korean peninsula amounted to a special circumstance to which the 10-year period could not be applied.

"Should the statute of limitations be applied in this case, it would amount to depriving North Koreans of their inheritance rights", he said.

Park Tae-Seung, the lawyer who represented the daughter, said her client's father had urged her to escape to the South and get in touch with the family there.

"But the relatives cold-shouldered her and refused to part with her share of the inheritance," Park said.

The court ordered the family to hand over about 15 percent of a 50,000 square meter (12.4 acre) plot of land in South Chungcheong province.

Millions of Koreans were divided by the Korean War and although those who lived through the conflict are dying out, there are many second and third generation North Koreans who would have similar claims to that of Lee's daughter.

Another key ruling came in 2013 when South Korea's Supreme Court upheld the inheritance rights of North Korean children of a South Korean citizen -- even if they are still in the North.

The case involved a man who fled to the South during the Korean war, leaving his wife and five children in the North.

He remarried in South Korea, had four more children and, when he died in 1987, left close to $9.0 million in cash and property.

In 2009, his North Korean-born daughter -- who was in her 70s -- filed a lawsuit claiming her father's South Korean children should share the inheritance with their North Korean half-siblings.

The case was notable for many reasons -- not least the fact that the six-decade division of the Korean peninsula meant the plaintiffs could never appear in a South Korean court.

They could not even meet or talk directly to the South Korean lawyer they managed to hire, Bae Keum-Ja, due to the permanent ban on direct telephone and postal links.

Instead they found a Korean-American missionary who carried all the necessary evidence out of North Korea by hand, including hair and fingernail samples for DNA testing.

In a 2011 district court ruling, which was then upheld by the Supreme Court last year, the North Koreans were formally recognised as their father's biological children with equal inheritance rights.

In this case, however, the plaintiffs are unlikely to see the money any time soon -- if at all.

Apparently concerned by the legal precedent and the chance of similar cases, the South Korean government enacted legislation in 2012 preventing inheritance being sent to the North and placing it instead in the care of a court-appointed custodian.

"This law is apparently aimed at preventing any considerable amount of cash from being sent to North Korea as a result of such an inheritance battle", said Bae Keum-Ja.

"To put it simply, this means North Koreans should defect to the South or wait until reunification to receive their bequests", she said.

While both these cases received widespread attention, legal experts say reunification would open up other complex inheritance issues that are rarely discussed -- claims by South Koreans to property holdings in the North.

This was a major headache in the immediate wake of German reunification in 1990 when more than two million claims were filed seeking the return of property seized by the state in the former East Germany -- around half of them for private houses.

Privately-owned land in North Korea was seized and declared a "state asset" with the establishment of the Democratic People's Republic of Korea in 1948.

"At that time, no compensation was made to the owners," said Kim Ha-Joong, a university professor and author of the book: "Settlement of the Past in a Reunified Korea."

According to Kim, reunification could trigger a rush for the return of ancestral land by South Koreans who fled the North.

"This would create extremely complicated legal problems which would take a century to sort out," he said.

"The solution would be to prepare legal provisions in advance that would enable the government of a reunified Korea to meet the original landowners halfway, but no serious legal study is being carried out to address this issue," he warned.

Biden pushes to get Democrats over finish line on spending package