Rare baby camel makes his debut at a zoo in Hungary

A baby camel of the endangered wild Bactrian or Camelus bactrianus ferus species made a first appearance at Budapest Zoo on Tuesday, following its birth last week. 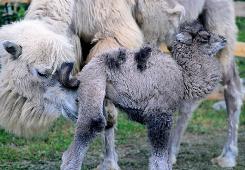 A one-week young camel, named Ilias, and its eight-year old mother, Iris, are pictured in Budapest Zoo and Botanic Garden on April 15, 2014

Baby Ilias, a male, was born on April 9, to its eight-year-old mother, Iris, whose maternal line has lived at the zoo for several generations.

Ilias -- whose father came from a zoo in Miskolc, a city in north-eastern Hungary -- was only presented to the media on Tuesday to give him time to bond with his mother, zookeepers said.

"When he was born there were problems, the baby was looking for milk from the mother, but as this was her first baby she had no experience," Zoltan Hanga, a spokesperson for Budapest Zoo told AFP.

"Us zookeepers had to hold down the mother and gently help the baby to feed."

Most wild Bactrian camels today are in fact domesticated.

A small group of around 800 to 900 live in the Gobi desert in Mongolia and China, but according to experts, are close to extinction.

Budapest Zoo was opened in 1866, and is one of the world's oldest zoos.