Movies by David Cronenberg, Jean-Luc Godard, Mike Leigh and Ken Loach are among the films selected to compete for the top Palme d'Or prize at next month's Cannes Film Festival, organisers said on Thursday. 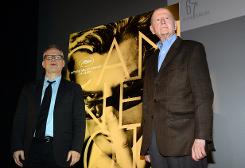 After months of speculation, just 18 of the more than 1,700 films submitted were rewarded with a berth in a line-up packed with Cannes' signature mix of established names and arthouse "auteurs".

Cronenberg's "Maps to the Stars", Godard's "Adieu au Langage", Leigh's "Mr Turner" and Loach's "Jimmy's Hall", expected to be his last feature, will all be in competition at the May 14-25 movie extravaganza on the French Riviera.

Announcing the shortlist at a ceremony in Paris, artistic director Thierry Fremaux tried to dampen down the controversy surrounding opening film "Grace of Monaco".

The festival would open with the "only version that exists, the one wanted by the director", he said, referring to Olivier Dahan's public row with US producer Harvey Weinstein.

Dahan had revealed earlier that a disagreement over the editing of the movie had led to "two versions -- mine and his" being made.

Held almost every year since 1946, the festival is famed as much for launching the careers of filmmakers such as Steven Soderbergh and Quentin Tarantino as for its glitzy red carpet photo calls, luxury yachts, star-studded parties and diamond heists.

Behind the scenes, film industry executives and producers turn the festival into a huge marketplace as they cut deals to secure a share in the next big movie event.

Other films in this year's competition include "The Homesman" by Tommy Lee Jones, "The Search" by Michel Hazanavicius, "Captives" by Atom Egoyan, "Saint Laurent" by Bertrand Bonello, "Sils Maria" by Olivier Assayas and "Two Days, One Night" by the Dardenne brothers.

From Asia, meanwhile, Japan's Naomi Kawase gets a slot with "Futatsume No Mado", while Abderrahmane Sissako from Mauritania makes the cut with "Timbuktu".

The 2014 roll call raises the prospect of an abundance of star names on the fabled red carpet such as Robert Pattinson and Julianne Moore ("Maps to the Stars"), Hilary Swank and Meryl Streep ("The Homesman"), Berenice Bejo and Annette Bening ("The Search") and Juliette Binoche and Kristen Stewart ("Sils Maria").

Organisers stress that they select strictly on merit but nevertheless came in for criticism two years ago when not a single woman director was chosen; last year there was one.

The shortest film in competition, Godard's "Adieu au Langage" runs to just one hour and ten minutes with the longest, "Kis Uykusu" by Nuri Bilge Ceylan, weighing in at a whopping three hours and 16 minutes.

Prior to Thursday's announcement, only two films had been confirmed for the 12-day festival although neither will be screened in competition.

"Grace of Monaco", starring Nicole Kidman as the former Hollywood star Grace Kelly, and "Party Girl", a French film about an ageing nightclub hostess, which will open "Un Certain Regard".

In addition to the row over the editing of Dahan's royal biopic, the movie also made headlines after Grace's children -- Prince Albert and Princesses Caroline and Stephanie dismissed -- it as "pure fiction".

Based around the late Prince Rainier, played by British actor Tim Roth, and Grace, who died in a car crash in 1982, it tracks events at a time when France was threatening to annex the tiny principality on its southern coast.

The Monaco royal family are expected to boycott the premiere.

A potential late addition to the Cannes line-up, possibly in an out-of-competition slot, could be Abel Ferrara's "Welcome to New York", which stars Gerard Depardieu as the disgraced former IMF chief Dominique Strauss-Kahn and Jacqueline Bisset.

Fremaux told AFP the selection committee had seen an unfinished version and "might" view the final version.

The festival will open on May 14 with New Zealand filmmaker Jane Campion, the only woman to win the Palme d'Or, heading the jury.

The filmmaker has described the festival as a “mythical and exciting” place where “amazing things can happen” adding that she knows this "because that is what happened to me".