England's Luke Donald fired a five-under par 66 to take a two-shot lead after three rounds of the US PGA Tour's Heritage. 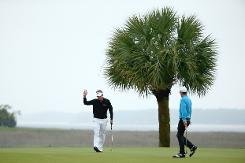 Luke Donald of England acknowledges the gallery as Scott Langley looks on, on the 17th green during the third round of the RBC Heritage at Harbour Town Golf Links on April 19, 2014 in Hilton Head Island, South Carolina

Donald went into the round with a share of fourth place behind the leading trio of K.J. Choi, Jim Furyk and Ben Martin, who topped the leaderboard after the storm-disrupted second round was completed on Saturday morning.

Donald, who has two runner-up finishes and two third-place finishes in his past five starts in the $5.8 million event, had an eight-under total of 205 going into Sunday's final round.

"I've always liked this golf course," the 36-year-old Donald said. "I'm really happy with the way I'm striking the ball. I felt like I was going to give myself a lot of chances."

Donald gained some quick momentum with an eagle at the par-five second hole. He mixed two birdies with three bogeys on the front nine, but four birdies on his inward run saw him gain control.

"I've really played extremely well today," the former world number one said. "Hopefully, more of the same tomorrow. I think we're in for a very windy day tomorrow, so I'll need to control the ball even better."

Huh came into the week having missed the cut in three of his past four starts, but said he never felt his game was too far off.

"I've been playing really good," Huh said. "I just wasn't able to put everything together.

"I think this is the week that I've put everything together."

Former major champions Charl Schwartzel of South Africa and Furyk were in a group sharing third on 208. Schwartzel carded a 68 and Fury posted a 71. They were joined by Martin (71), and Nicholas Thompson (68).

Matt Kuchar, who shared the first-round lead, posted a third-round 70 to join a group on 209 that also included Russell Knox, Brian Harman, Matt Every and Brian Stuard.

South Korea's Choi, who had made it into the clubhouse on Friday on five-under 137 for his share of the halfway lead, settled for a third-round 74 that left him six-adrift on 211.