Specialist puncheur Joaquim Rodriguez is feeling positive for the remainder of the Ardennes Classics despite crashing out of the Amstel Gold Race. 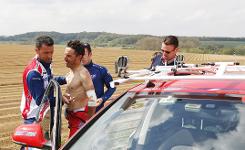 Spanish cyclist Joaquim Rodriguez (2nd L) of Katusha team is tended to after his fall during the 49th edition of the Amstel Gold Race in Valkenburg, in the province of Limburg, Netherlands on April 20, 2014

But it wasn't such good news for former Tour de France winner Andy Schleck, who hurt his knee in the same incident.

Spaniard Rodriguez, known as Purito, crashed out of Sunday's race after going down about 80km into the first of the three Ardennes Classics.

The 34-year-old complained of feeling dizzy and was taken to hospital to have his chest X-rayed.

But Rodriguez took to Twitter to say he expects to race both the Fleche Wallonne and Liege-Bastogne-Liege races this week and, more importantly, that he will be fully fit for next month's Giro d'Italia.

"It seems that there is nothing broken," he tweeted on Sunday night.

"Thank goodness, it will possibly be difficult these next few days in the Classics but I'll definitely start the Giro!"

Rodriguez would be one of the favourites if he took the start of Wednesday's Fleche Wallonne, which he won in 2012, fully fit as the final ascension of the Mur du Huy (wall of Huy) is tailor-made for his explosive capabilities.

Schleck, who won the Tour in 2010 after Alberto Contador was stripped of his win for doping, was less positive about his chances of competing at the Fleche or Sunday's Liege race.

"I did the work I had to do to start the Classics on good form," he told Luxemburger newspaper Wort.lu.

"I hope to show it in Fleche Wallonne and in Liege but I have doubts.

"Our Trek Factory Racing Team has competent people so I hope that we manage to resolve this problem."

The 28-year-old was brought down in the same incident that took down Rodriguez when Tinkoff-Saxo's Niki Sorensen crashed.

Schleck gamely got back on his bike and caught up with the peloton but 40km later he abandoned due to the pain.

His is due to be Trek's team leader for the Liege race, which he won in 2009.

Schleck is desperately searching for some confidence ahead of July's Tour de France when he should lead Trek alongside brother Frank.

However, his last top 10 finish in a major race was when he came second in the 2011 Tour.

He missed the 2012 Tour due to a broken pelvis and has never since recaptured his earlier form.