Prince William on Wednesday visited the South Australian town named after his grandmother Queen Elizabeth, where he and wife Kate met disadvantaged youngsters and tried their hands at DJ-ing. 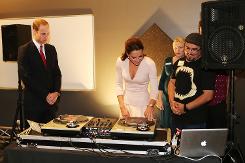 Catherine, the Duchess of Cambridge (L), looks on as her husband, Prince William (C), is shown how to play on DJ decks during a visit to the The Northern Sound System youth centre in Adelaide on April 23, 2014

Named after the British monarch in 1955, Elizabeth is a northern satellite suburb of Adelaide which in recent years has been plagued by unemployment.

In a youth-oriented day on their three-week tour Down Under, the British couple visited a community music programme and a skateboard park, where they had a go at spinning some tracks on the DJ decks and watched some breakdancing.

"She was fantastic," Shane Petersen, a workshop facilitator in the hip hop class the couple visited, said of Kate's ability to scratch a beat. "But he can fly a helicopter so it's horses for courses."

William, second in line to the British throne and a trained military helicopter pilot, also spoke of his taste in music, saying: "I like house music, I still like a bit of rock'n'roll and the classics and a bit of R'n'B."

The 31-year-old prince added a blue sky to an aerosol artwork then watched a BMX and scooter display, at which he and the duchess were given a skateboard featuring boxing kangaroos for their baby son George, who is with them on tour.

The royals, who flew in from Uluru in Australia's central desert where they had spent the night camping under the stars, then attended a civic reception for young volunteers and community leaders.

Thousands of people flocked to Elizabeth's Playford Civic Centre, with some staking their positions before dawn to catch a glimpse of the glamorous pair.

"I think it is marvellous they are actually recognising part of... Adelaide that has had some difficult times," acting South Australian Premier John Rau told the Adelaide Now website.

After the reception, the Duke and Duchess of Cambridge met 100-year-old Monica Swarbrick.

"The duke wished me a happy birthday," she said.

William and Kate have been greeted by tens of thousands of well-wishers on their tour of New Zealand and Australia, which ends Friday after a reception hosted by Prime Minister Tony Abbott in Canberra on Thursday.

10 years on, no peace after war in Syria