Struggling with flu, Gareth Bale had to make do with a place on Real Madrid's bench for their Champions League semi-final, first leg against Bayern Munich at the Santiago Bernabeu on Wednesday. 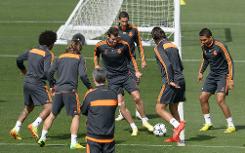 However, Cristiano Ronaldo returned to Los Blancos' starting line-up after missing Real's last four games due to a hamstring injury.

Ronaldo will be aiming to build on his record-equalling 14 goals in the Champions League this season against the defending European champions.

Bale has been suffering from flu for the past few days, but could still make an impact as a substitute.

The Welshman's absence means Isco will start in midfield with Angel di Maria moving to the right side of a front three.

Bayern boss Pep Guardiola goes with a similar shape as captain Philipp Lahm starts in midfield rather than at right-back to try and nullify the threat of Ronaldo.

Lahm is joined in central midfield by fellow German internationals Bastian Schweinsteiger and Toni Kroos as there is no place for Javi Martinez or Mario Goetze.

US to fly in baby formula on military contracted planes