Blaise Matuidi struck in the 89th minute to give Paris Saint-Germain a 1-0 win against struggling Evian at the Parc des Princes on Wednesday and take the capital club to the brink of the title. 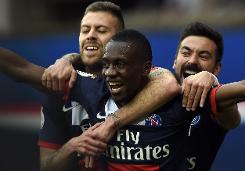 Paris Saint-Germain's midfielder Blaise Matuidi (C) is congratuled by teammates after scoring a goal during a French L1 football match against Evian Thonon Gaillard on April 23, 2014 at the Parc des Princes stadium in Paris

It looked like PSG would have to settle for a point against their 10-man opponents until Lucas played in fellow substitute Matuidi and the France midfielder slotted the ball through the legs of goalkeeper Jesper Hansen at the near post.

The result leaves the reigning champions 10 points clear of nearest challengers Monaco with only four games remaining and means they can clinch a second consecutive title with a win away to Sochaux on Sunday, or 24 hours earlier if Monaco lose at relegated Ajaccio.

However, the nature of the performance left coach Laurent Blanc far from satisfied at full time.

"The first half was very bad. We appeared to be lacking in motivation and were very slow moving the ball," said Blanc.

"There wasn't enough movement and Evian could even have been in front. We had a word with the players at half-time and the second period was better.

"Of course it wasn't our best performance but we did the job in the end."

Fresh from winning the League Cup by beating Lyon 2-1 in the final last Saturday, Blanc's side were looking for revenge on Evian, who beat them 2-0 in the reverse fixture back in December.

Evian are still scrapping to avoid relegation but they have performed well against the leading lights in Ligue 1 this season, taking four points out of a possible six against Monaco and also holding Lille.

They were unlucky not to take an early lead as well, Danish international Daniel Wass hitting the crossbar from a long-range free-kick in the fifth minute.

Wass then forced home goalkeeper Salvatore Sirigu into a good save from a header shortly after, as a PSG team still missing injured top scorer Zlatan Ibrahimovic and showing seven changes from that which beat Lyon struggled to find their rhythm.

When they did, Hansen raced off his line to deny Ezequiel Lavezzi and young midfielder Adrien Rabiot fired over as the first half ended goalless.

The early kick-off meant the Parc des Princes stands did not really fill up until the second half, but most of the drama was saved for after the restart.

Lavezzi was unable to convert a Rabiot cutback from inside the six-yard box before Evian were reduced to 10 men with an hour played when former Marseille defender Kassim Abdallah picked up a second yellow card for a foul on Lucas Digne.

Visiting coach Pascal Dupraz shook his head on the touchline, mindful of the onslaught that was to come, but Hansen saved from Lavezzi and Matuidi somehow missed the target after the Evian defence made a hash of dealing with a low ball across goal by the Argentine forward.

It looked as if Evian would hold on until, with just a minute remaining, Matuidi struck his fourth goal of the season much to the relief of the home fans.

Meanwhile, Lyon had to settle for a 0-0 draw away to Toulouse, a result which leaves Remi Garde's side in fifth spot, two points behind rivals Saint-Etienne and three clear of Marseille in sixth.

OL must finish in the top five to qualify for next season's Europa League.