Nadal loses in Barcelona for first time since 2003
World

Nadal loses in Barcelona for first time since 2003

World number one Rafael Nadal suffered his first defeat in Barcelona since 2003 on Friday when compatriot Nicolas Almagro ended his 41-match winning run in the Spanish city. 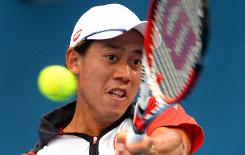 Nadal, who lost in the Monte Carlo Masters quarter-finals to David Ferrer last week, had last been beaten in Barcelona when he was just 15 years old.

Despite the defeat, 27-year-old Nadal refused to panic with the defence of his French Open crown starting in just a month's time.

He said losing a tennis match was nothing in comparison to the death of former Barcelona football coach Tito Vilanova who lost his battle with cancer at the age of 45 on Friday.

"To lose is not a drama. What has happened to Tito Vilanova is. We are left with his example and I send my support to his family," said Nadal.

He added: "I was better in parts of the match, but sport is like that. It was my turn to lose and I congratulate Nico."

Nadal will next defend his Madrid and Rome Masters claycourt titles -- two of the 10 tournaments he won in 2013 after a seven-month injury lay-off.

He could lose his world number one ranking with Novak Djokovic set to pounce.

"I lacked a bit of intensity at points in the match," added Nadal. "That is tennis and now I have to suffer for a bit, but keep fighting and think about Madrid."

Friday's victory was 28-year-old Almagro's first over Nadal in 11 meetings, a series which included a straight sets loss in the 2013 Barcelona final.

He needed two match points to secure his shock triumph while surviving 47 unforced errors. The sixth seed had also been a break down in the deciding set.

Nadal's last defeat at the tournament was in the second round to compatriot Alex Corretja in 2003 before he skipped the 2004 event through injury.

His loss of the second set to Almagro on Friday was the first he had dropped at the Real Club de Tenis since 2008.

That ended a run of 44 consecutive sets.

"Winning the last point I felt happy for all of my team," said Almagro who broke Nadal three times in the final set.

He had trailed 3-1 in the decider and had been 3-1 down in the second set tiebreaker.

"This victory could mark a turning point in my career. It is a victory against the best player in history on this surfce," added Almagro.

"In the first set it was more difficult for me. He kept me far behind the baseline and I couldn't find a solution. After that, though, I started to believe in my backhand a bit more to counter his forehand."

Almagro, the world number 20, will face Santiago Giraldo of Colombia for a place in the final.

Giraldo went through when Germany's Philipp Kohlschreiber retired with a left thigh injury while trailing 4-3 in the second set having dropped the first 6-4.

Japan's Kei Nishikori continued his impressive return to action after a three week absence due to a groin injury as he beat 12th seed Marin Cilic 6-1, 6-3 to reach the semi-finals.

Nishikori, seeded fourth, was ruthless in the opening set as he broke the big Croat's serve three times.

The second set was more of a contest, but the world number 17 still had too much as he sealed victory in just over an hour to register his best ever run in Barcelona.

Next up for Nishikori will be a meeting with Latvian ninth seed Ernests Gulbis after he secured a third semi-final appearance of the season with a 6-1, 6-4 win over Russia's Teimuraz Gabashvili.