Abdul Khalik remembers vividly the moment almost seven decades ago he saw his father being driven away from their remote Indonesian village by Dutch soldiers to be executed. 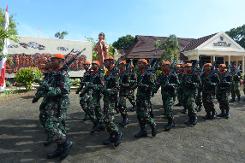 Indonesian soldiers march during an event in Makassar on December 11, 2013 to remember the victims of massacres ordered by Dutch forces captain, Raymond Westerling, who masterminded the campaign on Sulawesi during the 1940s war of independence

"He said to me, 'Go home, son' but I refused," recalled the 75-year-old, his eyes focused somewhere in the distant past, during an interview in Bulukumba district on the central island of Sulawesi.

His father was shot dead the next day, one of thousands killed by the Dutch army during the 1940s war of independence as Indonesia fought to shake off colonial rule.

This was during a 1946-47 operation by the Dutch to reassert control in Sulawesi after they were almost driven out, one of the darkest episodes of the independence war, which saw thousands of suspected rebel fighters killed.

After some widows won compensation last year, the Netherlands apologised for all summary executions carried out during the independence struggle and said it would pay out to other surviving partners of those killed.

But far from turning the page on a dark chapter, the renewed attention on Dutch atrocities committed at the end of a more-than three century occupation of the archipelago has only fuelled calls for more to be done.

Khalik and others are now demanding that the victims' children -- not just the widows -- receive compensation and have taken their case to court in the Netherlands. A hearing on their case is to take place in The Hague in August.

"It is not fair. The arrests are the same, the imprisonment the same, the shooting the same, the events the same, so why do the children get different treatment?" said Khalik, adding he would share any money with his 32 grandchildren and one great grandchild.

Shafiah Paturusi, an 82-year-old who lost her father and brother on Sulawesi, added: "I want justice from the Dutch, because the pain of losing a father is equal to -- if not worse than -- losing a husband."

A notorious Dutch forces captain, Raymond Westerling, masterminded the campaign on Sulawesi, a large island made up of four peninsulas with a rugged, mountainous interior.

Dutch forces would surround villages and then weed out suspected enemy fighters before killing them without trial.

There is strong disagreement over the number that died during the months-long campaign, with some in Indonesia claiming that up to 40,000 were killed although historical studies have put the figure at 3,000 to 4,000.

The operation proved hugely controversial and Westerling was relieved of his duties in 1948, although he never faced trial for war crimes.

For the older generation on Sulawesi, memories are still raw.

Khalik recalled his father and others were "piled up in a truck like animals" before being driven away -- although the older man still managed to wave goodbye to his son as the vehicle drove off.

"The next day my father was taken from prison, chained up with eight others and they were all executed," he said.

Liesbeth Zegveld, a Dutch human rights lawyer who has won compensation for Indonesian widows, is also representing some of the children.

She is hopeful of success but warned it might not be easy because time was running out, as many seeking redress were already elderly.

"The state tries to pay out as little as possible by taking time with all these claims, asking questions and questions, time and time again," she told AFP.

Jeffry Pondaag, from a Dutch-based foundation run by Indonesians helping those seeking compensation, said that in addition to money they wanted the Dutch be more open about the darker side of colonial rule.

"We will fight for the Dutch government to explain to their people that what they did to Indonesia was wrong," said Pondaag, who works in a cement plant northwest of Amsterdam.

However a Dutch government statement insisted that Jakarta and The Hague had "drawn a line under this part of their shared history".

"The Dutch government has repeatedly expressed its deep regret for the painful way in which the Netherlands and Indonesia separated," the statement said.

Diplomatic relations between Jakarta and The Hague are generally good and the Dutch colonial period belongs to bygone era as far as most younger Indonesians are concerned.

But some in the older generation still harbour resentment about a period that began when traders from the Netherlands arrived at the end of the 16th century.

They seized much of the archipelago, before the Dutch state took over in the early 19th century. It was only after Japanese occupation in World War II that Indonesia declared independence, on August 17, 1945.

The Dutch sought to regain control, sparking the bloody war of independence that lasted until 1949, when the Netherlands recognised Indonesia as a sovereign state.

Some widows have already been compensated. Ten who brought legal action in the Netherlands over the Sulawesi campaign received money ahead of last year's apology.

Others whose husbands died in a 1947 massacre in Rawagede, on the main island of Java, have also received compensation.

The Dutch government in August last year said other widows with similar claims had two years to apply for compensation.

But money does not always bring closure.

"We have forgiven the Dutch but when I received the money, I had mixed feelings," said Andi Aisyah, a wheelchair-bound woman in her 90s, whose husband was killed on Sulawesi.

"The pain that was long buried returned."