German NSA panel to invite heads of US Internet giants

A German parliamentary panel looking into US Internet and telecoms surveillance plans is to invite the heads of Facebook, Google, Apple and Microsoft, a lawmaker said Wednesday. 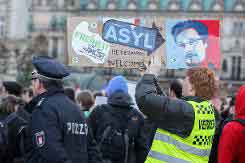 Protestors hold up placards featuring a picture of former NSA contractor Edward Snowden during a march against the spying methods of the US in Hamburg, on December 28, 2013

A motion to invite them as witnesses would be adopted at a Thursday meeting of the committee of inquiry, Social Democratic panel member Christian Flisek told reporters.

The panel was set up to assess the extent of spying by the US National Security Agency and its partners on German citizens and politicians, and whether German intelligence aided its activities.

It earlier decided it wants to question fugitive US intelligence leaker Edward Snowden, perhaps via video link or by sending an envoy to Russia where he has been given temporary asylum.

Snowden, regarded as a traitor by US President Barack Obama's administration and subject to an arrest warrant, has spoken via video link to other bodies, including the Council of Europe.

Germans were outraged by revelations last year that the NSA eavesdropped on Chancellor Angela Merkel's mobile phone, as well as about wider US surveillance programmes of Internet and phone communications.