A takeover battle for parts of French power and rail group Alstom heated up on Wednesday, with US group General Electric promising to create 1,000 jobs in France, a source close to the matter said. 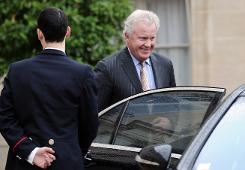 General Electric (GE) chief executive Jeffrey Immelt leaves the Elysee Palace in Paris, after his meeting with the French President on May 28, 2014

The two bidders, General Electric and German group Siemens, now have two to three weeks to complete their moves to win Alstom's power generation division which they value in the range of 10.5-12.5 billion euros ($14.3-17 billion).

The beleaguered French government is clearly glad to be able to play off two rival offers.

After a meeting between French President Francois Hollande and GE head Jeffrey Immelt, the source said that "General Electric has undertaken to create 1,000 jobs in France."

Referring to the counter offer from Siemens, a French presidential source said: "We are working in the context of two proposals."

At stake is the future ownership of Alstom's business focused mainly on making turbines and related equipment for power plants, including some nuclear facilities. This accounts for about 70 percent of sales by Alstom which is also a world leader in making railway rolling stock, including the TGV high-speed train.

The fate of the company, a top name in French industry, is a problem for the French Socialist government which is fighting to arrest a decline France's industry, to boost exports and cut record unemployment.

Industrial decline, and a switching of jobs to plants abroad, together with unemployment and efforts to reduce a budget deficit, cost the government dearly in recent municipal elections and were factors in a drubbing again on Sunday in European elections.

Last week GE extended the life of its offer by three weeks until June 23 to allow time to win over the French government.

Siemens intends to present its full proposal on June 16 at the latest if it is given the same opportunities to look at the Alstom books as was GE.

The head of Alstom, Patrick Kron, who favours the GE tie-up, has promised Siemens that it will be treated fairly.

Alstom is a privately owned company, but depends heavily on contracts from the French government which orchestrated a rival offer from Siemens when it learnt that Kron seemed close to a deal with the US group.

Alstom, which faces financial strains, had already put part of its rail activities up for sale.

The company considers that it is too small on the world market for power-generating turbines but could be the world leader in the rail sector, and has sent strong signals it prefers a deal with GE.

But when the advanced stage of these talks with Alstom emerged, the government expressed alarm that control of Alstom's power industry, including some nuclear power activities, would move to the United States and that jobs would be lost.

GE already has big manufacturing activities in France, some of them next to Alstom production lines.

The government then encouraged Germany's Siemens to make a counter offer. Siemens is interested in acquiring the power business in exchange for handing Alstom its own rail division.

The proposed GE jobs would be in the industrial sector, the French source said on Wednesday after the second meeting between Hollande and Immelt.

Earlier, sources close to the French president had said: "Today it is possible to see that the offer from General Electric is becoming clearer, has been improved, strengthened, notably concerning employment."

France, which has armed itself with greater powers to block foreign acquisitions of strategic firms, has been seeking to obtain the best deal for Alstom, and kept up the pressure on both suitors.

"We want both the bidders to improve their offers," Economy Minister Arnaud Montebourg said Wednesday.

SINGAPORE: From monitoring vital signs to filtering filthy air and even translating speech into other languages, the coronavirus-fuelled boom in mask-wearing has spawned an unusual range of high-tech face coverings.

A third anti-government activist has been arrested on a charge of intending to do harm to Her Majesty the Queen’s liberty during her motorcade last Wednesday.

WASHINGTON: After a four-year journey, Nasa's robotic spacecraft Osiris-Rex briefly touched down on asteroid Bennu's boulder-strewn surface on Tuesday to collect rock and dust samples in a precision operation 330 million kilometres from Earth.