Spain's Princess Cristina, a sister of the new King Felipe VI, will discover Wednesday whether she faces the threat of an unprecedented criminal corruption trial. 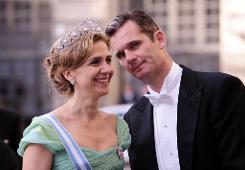 Princess Cristina of Spain and her husband Inaki Urdangarin, shown in 2010. The princess a sister of the new King Felipe VI, will discover Wednesday whether she faces the threat of an unprecedented criminal corruption trial

Less than a week after King Felipe, 46, took the Spanish throne promising an "honest and transparent" monarchy, a court ruling will resurrect a graft scandal that dogged the twilight of his 76-year-old father Juan Carlos's reign.

Cristina, 49, who was previously considered untouchable, risks being sent to trial for supposed complicity in the allegedly dodgy business affairs of her husband, 46-year-old former Olympic handball player Inaki Urdangarin.

On Wednesday, a judge in Palma de Mallorca, Jose Castro, will wrap up two years of investigations into the affair by recommending any charges to be laid and any suspects to be put in the dock.

A final decision on whether to put the suspects on trial will only be taken by the Palma de Mallorca provincial court after considering any appeals.

If the smiling, blonde-haired Cristina ends up on trial, it would be a first for a direct relation of a Spanish monarch.

The scandal overshadowed the final years of the reign of Juan Carlos, who guided Spain from dictatorship to democracy after the death in 1975 of General Francisco Franco but tearfully abdicated in favour of his son on June 18.

As prince, Felipe was unscathed by royal scandals.

But now that he sits on the throne, it is unclear how his reputation will fare in light of the allegations against his sister and brother-in-law.

The investigating judge has delved into allegations that Cristina's husband and a former business partner creamed off six million euros ($8 million) in public funds from contracts awarded to a charitable foundation, Noos.

Cristina sat on the board of Noos and Urdangarin was its chairman.

Together with her husband, the princess jointly owned another company, Aizoon, which investigators suspect served as a front for laundering embezzled money.

In February this year, the investigating judge grilled Cristina in a six-hour hearing over accounts indicating the use of money from Aizoon for personal expenses, including work on the couple's Barcelona mansion, dance lessons and Harry Potter books.

But the princess, a mother of four with a master's degree from New York University, said she had simply trusted her blue-eyed, 6-foot 6-inch (1.97-metre) tall husband and had no knowledge of his business affairs.

Much of the Spanish media now anticipates that the judge will call for both Urdangarin and Cristina to face trial.

If so, the result of any appeals could be pivotal.

Anti-corruption prosecutors have previously opposed the judge's decision to name Cristina as a suspect, saying there was insufficient evidence.

Whatever the outcome, Cristina and Urdangarin have suffered a dramatic fall from grace since they married in 1997 in a lavish ceremony in Barcelona and were bestowed the titles of Duke and Duchess of Palma.

In 2009, the couple, who by then had four children, moved from Barcelona to Washington, where Urdangarin worked as a telecommunications executive.

Then the allegations of corruption broke in Spain.

"All we want to do is live a normal life and you won't let us," Cristina said when approached by a Spanish television reporter in a Washington supermarket in February 2012.

The family returned in August 2012 to Barcelona, where they own a mansion which reportedly cost around six million euros ($8 million). It has since been impounded by the courts. After a year in Barcelona, they moved to Geneva.

Cristina has been sidelined from royal activities since the scandal broke.

She was notably absent from ceremonies marking her brother Felipe's ascension to the throne on June 19.

Since Felipe became king, neither Cristina nor her elder sister Elena, 50, form part of the official Royal Family. Under Spanish law, the representatives of the crown comprise only the king, his wife, his immediate forebears, his descendants and the crown prince.