Galen Rupp captured his sixth straight American title as he used a dominating late kick to win the men's 10,000 metres at the US Track and Field Championships on Thursday night. 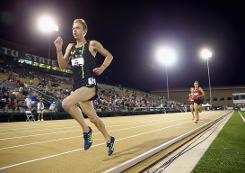 Galen Rupp runs to victory in the Men's 10000 Meter Run on day 2 of the USATF Outdoor Championships at Hornet Stadium on June 26, 2014 in Sacramento, California

Rupp, who is the American record holder in the distance, made his move with 500 metres to go, finishing with a time of 28 minutes, 12.07 seconds at the Hornet Stadium track.

Rupp, who won silver at the 2012 London Olympics, broke his own USA record last month at the Prefontaine Classic with a time of 26:44.36. He hasn't lost a race in America since 2008.

Rupp almost didn't compete in Sacramento as his wife, Keara, is due to give birth to twins soon.

The five-time national champion -- who is 34 weeks pregnant -- finished the 800 metre heats in last place with a time of two minutes, 32.13 seconds.

Her time was almost 35 seconds off her personal best of 1:57.34, which she ran four years ago. But Montano said it wasn't about running fast.

Montano says she ran because she wanted to show that women "can be fit while pregnant, continue their career and pursue having a family."

Organizers had the novel idea this year of beginning the national outdoor athletics championships on the lawn of the State Capitol building before the event shifted to Hornet Stadium at Sacramento State University for four days of competition.

Felix finished in fourth place in her heat with a time of 11.53 seconds but it was still good enough to finish in the top 16 and go on.

English Gardner posted the best time in the heats Thursday with 11.30 seconds. She finished just ahead of Tori Bowie who clocked 11.33.