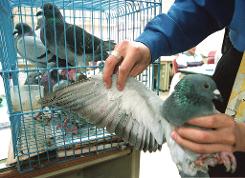 The suspects were accused of setting traps along racing routes to capture the pigeons before demanding up to Tw$10,000 ($333) per bird from their owners in ransom money, the Taipei City police department said.

Police arrested the suspects when they were allegedly setting up traps in a seaside mountain near Taipei with nets, cages, slingshots in their possession earlier this week.

It was not immediately clear the amount of ransom the alleged kidnappers collected, though police estimated that they had already caught dozens of pigeons.

Pigeon racing is popular in Taiwan but has been linked to criminal activities such as underground gambling, extortion and race fixing, as well as kidnapping the birds for ransom.

Animal rights group PETA (People for the Ethical Treatment of Animals) in May urged Taiwanese authorities to investigate the pigeon racing industry, which it called "the most extreme, most deadly, and most crime-ridden" in the world.

More than 30,000 Taiwanese pigeon breeders race about two million pigeons each year, of which an estimated 1.5 million die, according to the group.

PETA said a five-month investigation it carried out in Taiwan found that races "often proved fatal" for pigeons that were released hundreds of kilometres (miles) offshore and forced to fly home. Pigeons were also forced to race with untreated injuries, while not properly rested or in extreme weather, it said.