Scott in touch at Open after strong recovery
World

Scott in touch at Open after strong recovery

World number one Adam Scott lost important ground on the leading pack at the Open after shooting a one over par 73 to fall three shots back of overnight leader Rory McIlroy. 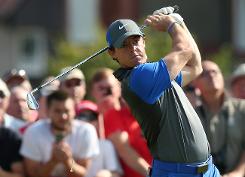 Australia's Adam Scott plays out of a bunker on the second hole during his second round of the British Open Golf Championship at Royal Liverpool Golf Course in Hoylake, north west England on July 18, 2014

The Australian 34-year-old endured a frustrating morning second round as blustery winds and threatening skies, combined with a malfunctioning putter proved his undoing.

To his credit however, Scott, who has won 27 professional events, reached the halfway point of his quest for a first Open crown with two late birdies at the difficult 17th and par-five finishing hole.

"There were some ups and downs, but it was really, really important to finish with a couple of birdies and put me in good shape for the weekend, I think," he said.

There were signs, it might not be the Adelaide native's day to challenge for the lead as early as the first hole when his normally reliable long putter skidded an easy birdie putt wide of the cup.

Back-to-back bogeys followed to leave him two-under for the tournament before his first birdie of the day at the relatively easy par five fifth gave reason for hope.

Along with playing partner Justin Rose of England and American Jason Dufner, the trio found the par-72 Royal Liverpool course in defiant mood.

After the ideal conditions for Thursday's opening 18 holes which produced a birdie fest for the field, the rolling layout bared its teeth with gusting winds playing havoc with the ball at times.

The par four 12th hole, which proved to be the toughest on the course when the Open was last held at Hoylake in 2006, claimed another bogey victim in Scott as he headed down the stretch battling to keep his round together.

The next par three at 13, where Scott picked up his third birdie of his opening round, this time saw the former Masters' winner drop another stroke to fall to three over for the day.

But a superb birdie at the tough 17th restored order to his scorecard and when he just missed a greenside bunker at the last, he was able to easily two-putt and finish with a birdie.

Those final two holes may prove extremely valuable with a large number of the leaders yet to finish their rounds and 36 more holes yet to come at the weekend.

"Seems like we're going to see it all over the weekend, maybe. Tomorrow doesn't look great, and I think that's all right," said Scott.

"The last 36 of the major is going to be a grind. And if it's tough conditions, you know, I'm certainly up for that challenge.

"I feel like I'm swinging the club really well. So the tougher it gets I think more of that favors me, if I can keep swinging well."

Scott, who dethroned Tiger Woods as world number one earlier this year, is chasing a second major after becoming the first Australian to win a Masters green jacket in 2013.

He previously blew tournament winning chances at the 2011 Masters and notably the 2012 Open at Royal Lytham.

He had a golden chance to lift the Claret Jug two years ago when leading by four shots with four holes to play.

His late collapse allowed South African Ernie Els to win his second British Open after lifting the title in 2002.